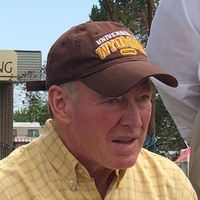 Funeral services for Ralph “Greg” Schaefer will be at 10:00 a.m. Friday, May 17, 2019 at Prince of Peace Lutheran Church in Gillette, WY with Pastor Deb Cote officiating. Ralph Gregory “Greg” Schaefer of Gillette died Friday, May 10, at Legacy Living and Rehabilitation in Gillette from complications of Parkinson’s disease. He was 62 years old. Greg was born Sept. 7, 1956, in Riverton, Wyo., to Ralph and Janet (Watt) Schaefer. He graduated from Riverton High School in 1974. Four years later, 1978, he graduated from the University of Wyoming with a Bachelor of Science degree in civil engineering. He was a member of Tau Beta Pi Association. The elite honor society is the oldest engineering honor society and the second oldest collegiate honor society in the United States. It honors engineering students in American universities who have shown a history of academic achievement as well as a commitment to personal and professional integrity. He graduated with a Master’s Degree in hydrology from the University of Wyoming in 1982.  After his many years at UW, Greg was truly a diehard Wyoming fan and supporter. It stood to reason that he would use his training by going to work at Western Water Consultants of Laramie. The firm was headed by another UW diehard, Paul Rechard.
On Jan. 22, 1983, he married Lori Hoesel, also from Riverton. Michael and Kayleigh were born to the couple.  In 1989 Greg joined ARCO Coal in Gillette. The company was later purchased by Arch Coal. Greg would retire from the company in June 2015 as Vice President of External Affairs for Western Operations.  Greg’s knowledge of Wyoming and the integrity with which he lived made him an ideal board member and representative at local and national levels. He self-identified as an easy target when it came to state or local improvement causes, University of Wyoming education, or representing the state in national politics and energy development. He was proud of all his service on these committees and felt particularly honored to serve as a member of the University of Wyoming Board of Trustees, board member of the Wyoming Congressional Awards, and National Committeeman for the Wyoming Republican Party. While Greg was the National Committeeman for the Wyoming Republican Party he served on the National Republican Party Rules Committee and the Committee on Arrangements. He loved politics and worked on many campaigns for state and national elected officials. It was his intention to run for an elected office someday. He was preceded in death by his mother and father. Greg is survived by his wife Lori; son Michael Schaefer, daughter Kayleigh Reardon (Nate);
grandchildren Alexander Gregory Schaefer, Graham Reardon and Reese Reardon; sisters Ann Dawson (Jim), and Jean Yennie (Thane) and many incredible nieces and nephews.  The family encourages those interested to donate to a memorial bench at UW, to Legacy Living and Rehabilitation, or a charity of their choosing in memory of Greg. Memorials and condolences may be sent in care of Walker Funeral Home 410 Medical Arts Court, Gillette, WY 82716. Condolences may also be expressed at www.walkerfuneralgillette.com

To order memorial trees or send flowers to the family in memory of Ralph Gregory Schaefer, please visit our flower store.