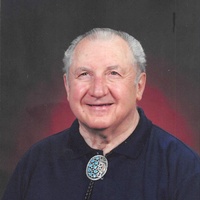 Ralph John Attianese passed away peacefully on December 12, 2018 with his wife, Margaret of 68 years by his side, at The Legacy Living and Rehabilitation Center.  He was born in Brooklyn, New York on July 18, 1929.  When he was a young man he served in the National Guard and on September 3, 1950 he was activated into the Army and served in the Korean War.  That same year he married the love of his life and they had two girls, Theresa and Louise.  In 1965 the family moved to the Catskill Mountains of New York to a Hamlet called Palenville, NY. Ralph was an active member of Knights of Columbus while living in New York; he was a Fourth Degree Knight. Ralph loved to garden and was especially proud of his tomato plants. After he and his wife retired they decided to move to Wyoming in 1995 to be closer to their daughter Theresa Jennings of Rozet, WY. Ralph is survived by his wife, Margaret; daughter, Theresa Jennings; grandchildren, Cory West of Laramie, WY;  Roxanne West of Rozet, WY;  and Ralph and Francis Bishop of New York;  three great-grandchildren, Caprice Hussey; Wyatt and Caden Bishop. He is preceded in death by his daughter, Louise Barbara Bishop of Saugerties, New York. Memorials and condolences may be sent in care of Gillette Memorial Chapel 210 West 5th Street, Gillette, WY 82716. Condolences may also be expressed at www.gillettememorialchapel.com

To order memorial trees or send flowers to the family in memory of Ralph John Attianese, please visit our flower store.