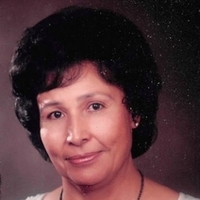 Mass of Christian Burial for Phoebe Davila will be held at 11:00 a.m., Saturday, November 9, 2019 at St. Matthew’s Catholic Church with Father Cliff Jacobson officiating; interment to follow at Mt. Pisgah Cemetery. Visitation will be held from 5:00 p.m. to 7:00 p.m., Friday, November 8, 2019 with Vigil to begin at 7:00 p.m. at Gillette Memorial Chapel. Phoebe May Davila beloved mother, grandmother, great-grandmother, and great-great-grandmother passed away November 5, 2019 at her home in Gillette, Wyoming while surrounded by her family.

Phoebe was born December 26, 1932 to Albert and Nora (née Young) Six Feathers in Allen, South Dakota. She was the only surviving child of this union.  She spent her early years on her grandfather's farm and received her education at Holy Rosary Mission.

On January 23, 1950 she married John Henry Davila in Julesburg, Colorado and began her life as a mother and homemaker.  They lived in Julesburg until 1952 then moved to Kimball, Nebraska.  In 1961 Phoebe and John moved their family to Gillette, Wyoming, making it their life long home. In 1991 their family suffered a great heartbreak with the loss of Manuel Michael Davila during the Iraq War.

In 2005 Phoebe's beloved husband John passed away leaving a deeply felt void in her life.

Phoebe was a member of Saint Matthew's Catholic Church and in her early years, enjoyed traveling with her husband John to Knights of Columbus conventions where she met many wonderful friends. She was a eucharistic minister and volunteered her time to various Catholic causes.

Phoebe was a source of comfort to all her children and grandchildren and will be sadly missed by all who loved her.

She was preceded in death by her parents, husband, John, son, Manuel Michael, granddaughter Ashlie, son-in-law, David, half-sisters, Cherry and Doris and half-brother, Albert. Memorials and condolences may be sent in care of Gillette Memorial Chapel 210 West 5th Street, Gillette, WY 82716. Condolences may also be expressed at www.gillettememorialchapel.com

To order memorial trees or send flowers to the family in memory of Phoebe May Davila, please visit our flower store.