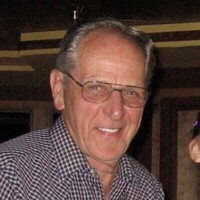 Graveside services for Phillip Plotke will be held at 11:00 a.m., Tuesday, August 24, 2021 at Mt. Pisgah Cemetery. Phillip John Plotke, 83, of Gillette, Wyoming passed away Sunday, August 15, 2021.  Phillip was born in Chicago, Illinois to John Paul Plotke and Alice Dorothy (Honjowski) Plotke on April 16, 1938. He proudly served our nation in the United States Air Force for 20 years, there he met and married his wife Ann Plotke. They were married 54 years at the time of her passing in 2017.  Ann had a daughter from a previous marriage, together they welcomed two sons, Johnny Phillip Plotke in 1966 and Jason Peyton Plotke in 1972.  After his Air Force retirement, they moved to Gillette where he continued to work in the coal mining industry teaching or instructing others, his Air Force training in airplane hydraulic systems served him well.  In his spare time, he enjoyed camping, fishing, bowling and pitching horseshoes.  He was very successful in his bowling and horseshoe pitching endeavors, bowling numerous 300 games and being the Wyoming men’s horseshoe champion for his age group, many times over the years.  He took great pride in being selected to the bowling and horseshoe hall of fame for the state of Wyoming, a tribute given by his peers.  He served in numerous capacities for both local and state leagues. Phillip is survived by his daughter, Rhonda (Windell) Liles of Cedar Park, TX; his granddaughter Amber Plotke and great-granddaughter Cecelia Plotke. Grandchildren, Lane (Nina) Liles, Paige (Brett) Cooper, Brooke (Josh) Crawford. Great-Grandchildren August Crawford, Isla Cooper, Bonnie Crawford, Blake Crawford and Ezra Cooper.  His brother Gerald Plotke, his sister Audrey (Matt) Janas.  His special friend Connie Filly and numerous nieces and nephews. Phillip was preceded in death by his parents, his wife Ann and both sons Johnny and Jason. Phil never met a stranger, had a zest for life was a loving husband, father and friend.  He will be greatly missed by all who knew and loved him. In lieu of flowers, the family requests that donations be made to Fireside Horseshoe Club or Gillette Youth Bowling Association in memory of Phillip Plotke.  Memorials and condolences my be sent in Phillip’s name to Gillette Memorial Chapel, 210 W, 5th St. Gillette, WY 82716.  Condolences may also be expressed at www.gillettememorialchapel.com

To order memorial trees or send flowers to the family in memory of Phillip John Plotke, please visit our flower store.