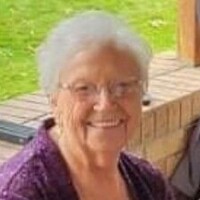 Peggy Sue Beam, 80, passed away peacefully on December 12, 2021, with her family by her side. Peggy was born on September 4, 1941, in Highland, Kansas to Virgil and Jean (Dennis) Sayre, she was an only child. Peggy’s dad passed away when she was only 16.  Peggy met the love of her life; Jim Beam, and they were married in 1959 and had a blessed 63 years. Together Jim and Peggy have one son, Scott, and they lived in Kansas most of their lives until moving to Gillette, Wyoming in the 90’s when Jim’s job as a federal coal mine inspector took them there. Over the years Peggy held various jobs which she enjoyed, such as working at the jewelry counter in Wal Mart during the Christmas season, and in the gift shop at the hospital. Through those years Peggy met many people who loved and adored her. Peggy loved her family dearly and adored all her grandchildren and great-grandchildren. Peggy could light up a room with her smile and her ability to talk to anyone for hours. She enjoyed spending time with her friends and family, taking trips with Jim, and loved going on their Alaskan Cruises. Peggy will be deeply missed by so many people, especially her family who loved her dearly. Peggy is proceeded in death by her father, Virgil Sayre, and mother Jean Davidson and stepfather Robert Davidson. Peggy is survived by her husband, Jim Beam; son Scott (Kathy) Beam; grandkids Rob (Bobie) Morris, North Pole, Alaska; Amy (Mark) Naus Sheridan, Wyoming; and Josh (Savannah) Beam, Gillette, Wyoming. Peggy has 8 great grandkids, Justin, Haley and Riley Morris in North Pole, AK, Cade and Vincent Naus in Sheridan Wyoming and Wyatt, Ella and Everleigh Beam in Gillette Wyoming. A celebration of Life will be held later.  Memorials and condolences may be sent in care of Walker Funeral Home 410 Medical Arts Court, Gillette, WY 82716. Condolences may also be expressed at www.walkerfuneralgillette.com

To order memorial trees or send flowers to the family in memory of Peggy Sue Beam, please visit our flower store.