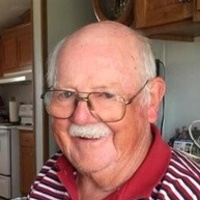 Graveside service for Paul Woods will be held at 11:00 a.m., Thursday, August 22, 2019 at Mt. Pisgah Cemetery, Gillette, WY. Paul Robert Woods, 82 years old, of Gillette, Wyoming passed away Sunday, August 18, 2019 at Close to Home Hospice House. Paul Robert Woods was born on February 25, 1937 to William and Dorothy (Johnson) Woods in Englewood, Colorado.  At the age of 9, Paul moved to California with his family, and later graduated from Thomas Downey High School in Modesto, California.  After high school, Paul joined the United States Navy and worked as a photographer mate for the Admiral.  After being discharged from the Navy, Paul started his family in 1956 and joined the Merchant Marines and spent seven years traveling the world.  Paul loved to fish, hunt and play golf.  He was a handy man and enjoyed working with wood. Paul is preceded in death by his son, Paul Randy Woods, and brothers, Johnny and Richard. He is survived by his wife, Casey of Gillette, WY; daughters, Terry (Tom) Snow of Modesto, CA; Jodie (Chris) Woods of San Bernardino, CA; eight grandchildren, fifteen great-grandchildren and one great-great-grandchild.  Memorials may be made to benefit those patients who cannot afford to stay at the Close to Home Hospice House. Memorials and condolences may be sent in care of Gillette Memorial Chapel 210 West 5th Street, Gillette, WY 82716. Condolences may also be expressed at www.gillettememorialchapel.com

To order memorial trees or send flowers to the family in memory of Paul Robert Woods, please visit our flower store.