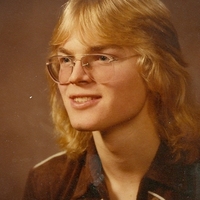 A memorial service for Paul R. Sleeth will be at 2:00 p.m., Wednesday, October 16, 2019 at Walker Funeral Home with Pastor Gordon Harper officiating. Paul Roland Sleeth, 57, passed away peacefully at The Legacy Living and Rehabilitation Center on Wednesday, October 9, 2019 after suffering a stroke. Paul was born November 27, 1961 in Glendive, Montana to George and Beatrice ( Strehlow) Sleeth. The family moved from Glendive to Baker, Montana where they lived for the first four years of Paul’s life. In 1965 Paul and his family moved to Gillette, Wyoming, where Paul was a long-time resident. Paul graduated from Campbell County high school in 1980. He worked at Bighorn Water Service, during high school, delivering bottled water to residents and businesses in town, and really loved it. Paul prided himself in his work.  He worked shortly for Tri-State Insulation, and eventually became a cementer, and worked many years for Specialty Concrete. Paul enjoyed spending time with family and friends. He was good at many things especially sports in his earlier life. He loved baseball, wrestling, football and track and stood out in all of them. He also loved anything on wheels starting with tricycles and bicycles and eventually graduating into cars which had many of, including his beloved 55 Chevy, which he found in the ally and talked his father George into helping him restore during Paul’s high-school years. Paul always enjoyed life to the fullest. Although Paul never married or had children, he had many friends through his years in Gillette. He is survived by his parents, George and Beatrice Sleeth; sisters, Barbara J. Hammond and Cynthia R. Lesko; brother, Robert G. Sleeth; along with three nieces and one nephew. Paul was preceded in death by his maternal grandparents, Hazel and Wayne Strehlow, paternal grandparents, Edna and Everette Sleeth, and many aunts and uncles. A memorial has been established in Paul’s name and can be sent in care of Walker Funeral Home 410 S. Medical Arts Court, Gillette, WY  82716. Condolences may also be expressed at www.walkerfuneralgillette.com

To order memorial trees or send flowers to the family in memory of Paul Roland Sleeth, please visit our flower store.