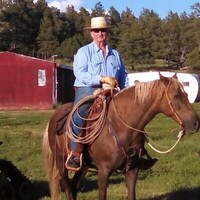 Mass of Christian Burial for Paul Kunz will be at 1p.m. Friday, November 6, 2020 at St. Patrick’s Catholic Church in Moorcroft, Wy with Father Bryce Lungren officiating. Burial will follow in the Pine Haven Cemetery. Visitation will be from 5-6 p.m. at St. Patrick’s Catholic Church on Thursday, November 5, 2020 with a vigil service at 6 p.m. Paul, age 75 passed away on Thursday, October 29, 2020 surrounded by his family at The Crook County Hospital in Sundance, WY.  Paul Gerald Kunz was born on July 30, 1945 to Charles A. and Mildred A. (Giles) Kunz in Emmetsburg, Iowa. He attended schools in Iowa and graduated from Mallard High School in 1962. After graduating high school, Paul met and married Carol Hiatt and had four daughters.  After 13 years of marriage, the couple divorced, Paul then moved to Wyoming to pursue his passions and cowboy life.  In 1981, Pamelia made a life changing impression on Paul when she poured a pitcher of water in his lap one afternoon at the Hub Café in Moorcroft.  The couple was married December 24, 1982 and had two sons.   When he moved to Wyoming Paul worked for the Barton Ranch for a few years.  He left cowboying to pursue a career in the oil industry in 1982.  He spent the next 39 years working for various employers with the final being True Oil.  He enjoyed his job and never retired.  Often asked what his job title was, he would tell you “the BS man”, just keep everyone happy.  Paul had a talent for keeping the peace and working through any issues, he also passed this amazing still to his children.  Paul spent much of his life horseback as this was one of his life’s passions.  He passed his love of horses to many of his children as well.  He also loved to shoot and hunt.  He spent many hours hunting elk from the back of a horse.  He enjoyed shooting contests with his sons in his later years, including sporting clays. His heart was glowing when watching his grandchildren in all of their activities. Paul was a lifetime member of the Catholic church, including St. Patrick’s Catholic Church of Moorcroft.  Paul was also a lifetime member of the NRA, Elk Foundation, and Turkey Federation. Paul is survived by his wife of thirty nine years, Pam Kunz of Moorcroft, WY, his three daughters, Jackie Imming, Sandy Kunz, Juilie (Lonnie) Lorton, his two sons, Vance (Lauren) Kunz and Clayton,  Stepdaughter, Samantha (Joseph) Mansell, and stepson, Gordon (Celeste) Hagstrom, his grandchildren, Elizabeth, Jessica, Trenton, Clarissa, Callie, Hattie and Tylie, Joseph, Jesse, Elizabeth, Tucker and Hayden, and one great granddaughter, Gabby. Paul was preceded in death by his parents, his daughter, Sherry Mehan, his twin brothers, Daniel and David Kunz. A memorial has been established in Paul’s name to benefit St. Jude’s. Memorials and condolences can be sent to Walker Funeral Home 410 S. Medical Arts Court, Gillette, Wyoming 82716. Condolences may also be expressed at www.walkerfuneralgillette.com

To order memorial trees or send flowers to the family in memory of Paul Kunz, please visit our flower store.