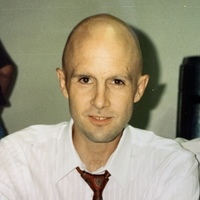 Funeral services for Patrick James Dorr will be held at 11:00 a.m. Monday, February 17, 2020, at Gillette Memorial Chapel in Gillette, WY, with burial to follow in Mt. Pisgah Cemetery. Lunch will be served at the American Legion Post #42 after burial services.  Visitation will be held on Sunday, February 16, 2020 from 1:00 p.m. - 4:00 p.m. at Gillette Memorial Chapel. Gillette resident Patrick (Pat) James Dorr, 65, died peacefully in his sleep Wednesday morning February 12, 2020, from complications related to cancer. Pat was born on January 3, 1955, in Sidney, Montana to Billy and Dolores Dorr (Carver). He was the second of five children, three brothers and a sister. He attended first and second grade in Miles City, Montana, before moving with his family to Gillette where he graduated from High School. Patrick then went on to earn a bachelor’s degree in Business Administration from Yankton College. In his pre-teen years Pat was most happy at his maternal grandparents’ ranch in Sidney, MT. He adored his Grandpa Pat and followed him everywhere to help in any way he could. Even when his grandfather fed him a slice of chewing tobacco (which Pat thought was a candy bar) everything was wonderful. Pat always regretted that he was not able to inherit the “farm” as it was affectionately known. Pat was very competitive and athletic, earning numerous honors, starting with the seven-year- old Punt, Pass and Kick championship in Miles City. He played football, basketball, baseball and ran hurdles in track. In High School, he earned all-conference honors in football and was invited to the Meet of Champions in track. His football success translated into a football scholarship, and he became a proud Greyhound at Yankton College, playing all four years. Sports were always a major part of his life growing up. He spent hours teaching his younger brothers how to play sports. Many hours were spent in Dody’s backyard playing football, baseball and basketball. Patrick even built his own hurdles so he could practice at home.  Later in life, he was able to enjoy watching his grandchildren playing a variety of sports. Patrick always had a story to tell. Some of them were actually true, but he also enjoyed sharing tall tales about his hunts for “Wile E. Coyote” and “Walter”, the fish no one could catch. With these stories, he developed friendships with many people he met throughout his life. Patrick married Margie Lynch (now Margie Von Flatern) in 1973, and they had two sons, Michael and Travis. He also had a third son, Dustin Rogers with Sherill Rogers. Patrick moved to Tucson, Arizona, in the early 1980’s.  It was in Tucson where he was eventually diagnosed with a rare form of brain cancer. Although treatments he received were experimental at the time, Patrick was able to fight off the cancer for nearly 30 years before it recurred. Patrick is survived by his father, Bill Dorr (Lenora); sons, Michael of Gillette (children Aidan and Reese); Travis (Sarah) of Grand Junction, CO (children Elli and Avery); and Dustin of St. Louis, MO; brothers, Mark (Carol); Joel (Julie); and Shawn (Sonya); and sister Michelle (Doug). He is preceded in death by his mother, Dody; stepfather, Melvin Carver; and stepmother, Betty Dorr. Memorials may be made to the American Legion Post 42 Baseball. Memorials and condolences may also be sent in care of Gillette Memorial Chapel 210 West 5th Street, Gillette, WY 82716 or via their website: www.gillettememorialchapel.com

To order memorial trees or send flowers to the family in memory of Patrick James Dorr, please visit our flower store.