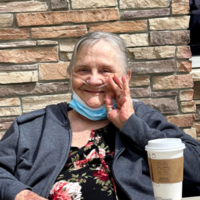 Patricia Vivian Fenske went peacefully with the lord on April 6, 2022 at 3:30 pm. Born in Weymouth Massachusetts in 1943 to Edna and Fred Krasco, Patricia was the middle of three children Fredrick Krasco, Patricia Vivian Krasco and Annamarie Katherine Krasco.  Their family would travel often and in 1953 would be stationed in Tustin, California after the Korean War. At the young age of 18 Patti would meet and marry Kenneth Watson and welcome her first daughter into the world Margaret Ann. In 1967 Patti would find love again and go on to remarry, welcoming her second child into the world with Richard Crispino in 1969, a daughter she named Rosemarie Christina.  A mother of two beautiful girls, Patricia worked hard to provide a life for them. Often working multiple jobs and long shifts, eventually taking a job at the Orange County Fair Grounds where she worked security. This is where Patricia would eventually meet and fall in love with Fredrick Fenske.  The couple married in October of 1984. Patricia gained and loved two wonderful children Heather and Derrick Fenske.  Her new family started their life together in Norco, CA. In October of 1985 Patricia and Fred would welcome their first granddaughter Cherish into the world and would eventually go on to raise her as their own.  Seven years later they moved to the White Mountains in Show Low, Arizona to start a new chapter in their life. Patti enjoyed several hobbies including crafting, sewing, cooking, riding her Harley Davidson through the White Mountains and walking the rim. She attended the Church of Christ and for a short time worked with troubled youth in the community. She loved baking and taking care of her animals. Enjoying a cup of hot tea with cream and sugar at night brought her comfort. Patricia and her husband would go on to fight multiple health battles during this time, eventually making the decision to be closer to family in Gillette, Wyoming.  Patricia will best be remembered for her courageous spirit and witty charm. Never a woman afraid to speak her mind, she always knew how to keep people on their toes. She fought a hard battle but never left any question how much her family meant to her. She loved fiercely and unapologetically. A true original.  A daughter, sister, mother, wife, nana, friend, and now Angel. Her legacy lives on through her brother, Fred; her children, Margaret, Rosemarie, Heather and Derrick;  her 16 grandchildren Cherish, Chelsea, Tristen, Adrian, Nikki, Gabriel , Bianca, Andrew, Sonya, Serena, Albert, Patricia, Alexandria, Keali, Aiden, Sydney and many great grandchildren. She is reunited in heaven with her beloved husband, Fredrick Fenske; sister, Annamarie Katherine Krasco (Wallingford) and her parents Edna and Fred Krasco.

I know you soar with angels now

And that your heart has wings

I know you’re watching over us

Whatever this world may bring

I know you were a gift from God

And that you’re safe above

I know that I will see you again

And once more feel your love

I know you live in Heaven now

And that I must go on

I know my heart will ache for you

Until my time is done

To order memorial trees or send flowers to the family in memory of Patricia Fenske, please visit our flower store.