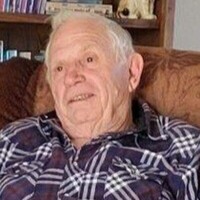 Funeral services for Orville Noldner will be held at 10:00 a.m., Monday, August 2, 2021 at First Assembly of God Church with Pastor Dan Holden officiating; interment to follow at Mt. Pisgah Cemetery. Orville William Noldner, 84, died July 10, 2021 after a short battle with cancer. He was born May 1, 1937 in Murdo, SD to Wilhelm and Mamie Noldner. His family moved to Gillette when he was 2, then to Savageton. He started his education in Savageton. He continued his education when he returned to Gillette. In 1950 the family moved to Newcastle. He completed his education thru the eighth grade. He worked many jobs starting as a pin setter in the local bowling alley. He met the love of his life, Della King in 1956. They were married in 1958. They made their home in Newcastle, where he worked at Johnston Fuel Liners as a truck driver, a mechanic and a welder. When Johnston’s closed, he went to work at Updike Brother’s, where he trained as a heliarc welder. In 1993 they moved to Walla Walla, WA. He became a millwright for Louisiana Pacific in Walla Walla and Pilot Rock, OR; until the sawmills closed in 1996. They returned to Newcastle where he was a welder for Key until he retired in 1999. They returned to Washington. He enjoyed traveling, he always dreamed of going through the Blue Ridge Parkway. In 2006 they made that dream come true as they toured the country for several weeks., In 2012 they moved to Gillette to be closer to Della’s mother. After her passing they returned to Washington. They returned to Gillette in 2018 to be closer to family, during this time he became a member of the First Assembly of God Church. Orville loved working with wood and made many beautiful pieces of furniture. He also loved being outside working in the yard or camping and spending time with family and friends. Orville is survived by his wife Della of 63 years; brother, Larry (Dani) of Cheyenne; children, Linda (George) Bonefield, Bill (Bev), Diana (Jeff) Fusselman all of Gillette; and David (Lynn) of Walla Walla, WA; 14 grandchildren, 26 great-grandchildren and numerous nieces and nephews. He was preceded in death by his parents, brothers, Clarence and Jerry; sisters, Caroline, Florence (Punk), and Louise and grandson, Byron Fusselman. Memorials and condolences may be sent in care of Gillette Memorial Chapel 210 West 5th Street, Gillette, WY 82716. Condolences may also be expressed at www.gillettememorialchapel.com

To order memorial trees or send flowers to the family in memory of Orville William Noldner, please visit our flower store.