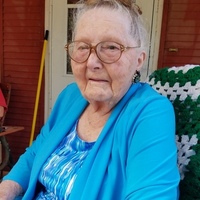 Orel (Orla) Kathleen Robbins, 95, passed away Friday, May 13, 2022 at The Legacy in Gillette, WY. She was surrounded by her loving family.

Orel was born April 1, 1927 in a one room cabin on the banks of Tongue River in Dayton, WY.  She attended 1st grade in Dayton.

Orel was the sixth of eight children for Harry Lindsey and Bertha (Kincaid) Lindsey. Orel spent her youth helping her parents and siblings with the daily chores.  Her parents raised livestock and had a large garden where they sold produce. What wasn’t sold was preserved for the family.   They seldom purchased any food, which required the entire family to work and toil in order to survive.  When Orel was in second grade, the family moved to Wyola, MT where they purchased a small ranch.  Being prosperous, her parents sold this small plot of land and purchased a larger ranch near Lodge Grass, MT. Orel attended Wyola School through the eighth grade.  She forfeited her high school education to help her family on the ranch.

On August 1, 1945 she married Cleo Robbins after a three day courtship. Cleo was serving in the military, and they corresponded for four years prior to his honorable discharge.  They made their home on a dust bowl ranch where Rumford, SD was their closest address. After struggling for five years, they lost their ranch and moved to Igloo, SD.  In 1961, they moved to Sheridan.  Orel remained in the Sheridan and Ranchester areas until recent years.

In her early years, she worked at the Silver Spur, The Ranch House, and The Magnum Restaurant. Following retirement, she was a teacher’s companion and helper for years and spent much of her time reading to young students.

Orel loved the Big Horn Mountains and spent many hours fishing, hunting, gathering, and camping.  She was a rawhide artist and a beading enthusiast, and she took pride in the fact that she utilized every part of any animal she harvested.

Mrs. Robbins was proceeded in death by her parents Harry and Bertha Lindsey, her twin sons Harry and Frank Robbins, her husband Cleo Robbins and her longtime companion Elmo Harris.

A celebration of life will be at the Legacy – date to be determined.

A private family gathering will be held at the Big Horn Battlefield where she’ll be laid to rest with her husband Cleo.

Arrangements are under the care of Walker Funeral Home, Gillette, WY.

In lieu of flowers, Orel has requested donations to a local charity of giver’s choice.

To order memorial trees or send flowers to the family in memory of Orel Kathleen Robbins, please visit our flower store.