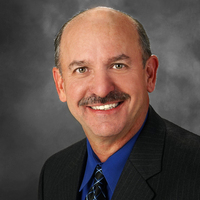 He was raised in Gillette and Spearfish, South Dakota, graduating from Spearfish high school. Olin had a keen interest in science and biology from a young age.  That interest was fostered by his grandfather Mark Richmond and led him to study and complete a bachelor’s degree in wildlife and fisheries sciences from South Dakota State University and a Master of Science degree in Wildlife Management from the University of Wyoming.  Concurrent with his studies, Olin enlisted with the Army Reserves, eventually transferring to the Wyoming National Guard.

Upon completion of his Master’s degree, Olin went to work for the Wyoming Game and Fish Department and eventually returned to Gillette, Wyoming as a wildlife biologist.  He enjoyed research and continued to study sage-grouse, sharptailed grouse and elk herds in the Fortification and Rochelle Hills areas which helped gain new insight regarding the population of these species.

While working in Gillette, Olin married Laurel Vicklund on February 29, 1992.  They shared many outdoor, scientific, and world travel experiences throughout their 30 years of marriage.  Together, they learned to appreciate different cultures, unique personalities, and perspective across the globe.  This marriage came with lots of extended family.  He loved spending time with his sisters-in-law, brothers-in-law, nieces, and nephews that included the Oedekovens, Lorings, Heckels, Straights, Alemans, Breningers, and Damons.

Olin valued education.  During his time serving in the Wyoming National Guard, he obtained a Master of Science degree in Strategic Studies from the US Army War College and completed several advanced programs on leadership, human resource management, international affairs, conflict management, and diplomacy. He served in a variety of staff and command positions during his 33-year military career with the US Army, the Army Reserves, and the Wyoming National Guard. In his last assignment at the rank of Brigadier General, he was the Deputy Adjutant General for the State of Wyoming.

As a life-long-learner he continued his education and completed both an MBA and Ph.D. in business and public administration from Northcentral University.  In 2004 Olin dedicated himself to making a difference in the world by developing values-based leaders. To this end, he and a colleague started The Peregrine Leadership Institute.

Along with his passion for leadership, Olin has always had an intrinsic enthusiasm for education. In 2009, while working as an adjunct professor for a university undergoing its accreditation process, he discovered a need for measuring the quality of education at the program level.  Being a solutions-oriented leader, he developed an idea and formed Peregrine Academic Services.  Several years ago, as he planned for the future, the two companies were merged into Peregrine Global Services, and he started his next phase of leadership by leading and mentoring the next generation of Team Peregrine.  In his business endeavors, and through his passion, Olin had the unique opportunity to impact leadership and leadership development for tens of thousands of individuals and organizations around the world.

Feeling called to provide leadership for causes he strongly believed in, Olin served on various boards including Harvard University’s Black Sea Security Program; Acted as the Liaison to the Wyoming Military Department’s Sister Country, Tunisia; Gillette College Business Program Advisory Board; University of Arizona’s Forbes School of Business & Technology Advisory Board; Energy Capital Economic Development; and most recently, he served on the Board of Trustees for Gillette College.

In 2005, he was named the Campbell County Chamber of Commerce Entrepreneur of the Year.  In 2015 he was named in the 10 Who Made a Difference by the Gillette News Record.  In 2020 Olin qualified to be a Fulbright Specialist by the U.S. Department of State’s Bureau of Educational and Cultural Affairs. Most recently, he was honored to receive the International Accreditation Council for Business Education’s Dr. John L. Green award, presented to him for “demonstrating a life-time of service and commitment to both IACBE and to the academic profession as a whole.”

Olin loved to travel and always incorporated a few days to tour the countries where he was working, visiting the cultural sites and historic buildings.  He enjoyed hunting throughout North America.  However, his true passion was fishing, and he spent many hours along the streams and lakes around Wyoming, where he often dreamt up the latest “Big Idea” and always took the opportunity to mentor others.

Olin was an active member of Prince of Peace Lutheran Church.

His Peregrine family whom he led, challenged, and mentored always.

The family will receive visitors at Gillette Memorial Chapel on Monday, October 10. 2022 from 4:00 pm – 6:00 pm.  Services will be held at the Prince of Peace Lutheran Church on Tuesday, October 11, 2022, at 10:30 am.  Graveside services to follow the funeral, at Mt. Pisgah, including Christian Burial, Masonic Services, and Military Honors.

Olin's funeral service will be webcast from Prince of Peace Lutheran Church.  You may view the service by following the link below just before 10:30am on Tuesday, October 11th:

To order memorial trees or send flowers to the family in memory of Olin Orton Oedekoven, please visit our flower store.