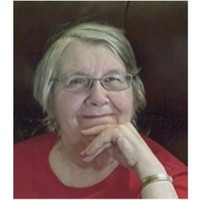 Mass of Christian Burial for Nyla Kellar will be held at 2:00 p.m., Friday, January 24, 2020 at St. Matthew’s Catholic Church with Father Bryce Lungren and Deacon Kim Carroll officiating. Visitation will take place from 4:00 p.m. to 7:00 p.m., Thursday, January 23, 2020 at Walker Funeral Home. Nyla Jean Kellar was called to the Lord on January 20, 2020 surrounded by her family. She was born March 16, 1933 in Williston, ND to Clifford and Alma Jane (Zimmerman) Stedem. In 1951 she married Henry Delaney together they had eight children. Henry later passed in 1970. In 1974 she married Keith Kellar they resided in Casper, WY until 1992 when they retired and moved to Ray, ND. In 2014 they moved to Gillette, WY due to declining health and to be closer to family. In 2015 they moved into The Legacy Living and Rehabilitation Center until the time of her death. She loved sewing, crafting, crocheting, and having coffee with friends. She will be missed by all who knew her. Nyla is survived by her husband of 45 years, Keith; sister, Margaret Tjaden of Minnesota; children, Cathy Delaney of Norfolk, VA; Christine Robertson of Greenville, GA; Mark Delaney (Pam) of Casper, WY; Mike Delaney (Pam) of Oak Harbor, WA; John Delaney (Jenny) of Camdenton, MO; James Delaney (Claire) of Independence, MO; Julie Delaney (Tom) of Gillette, WY; numerous grandchildren and great-grandchildren. She is preceded in death by her parents; sister, Shirley; son, Joseph Delaney; and granddaughter, Kyla Delaney. Memorials and condolences may be sent in care of Walker Funeral Home 410 Medical Arts Court, Gillette, WY 82716. Condolences may also be expressed at www.walkerfuneralgillette.com

To order memorial trees or send flowers to the family in memory of Nyla Jean Kellar, please visit our flower store.