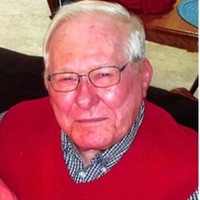 Nolan was born August 30, 1930 in Harvey, North Dakota, to Chester and Ella Bartz. He was raised on his parent’s homestead near Anamoose, North Dakota. During the Great Depression the family worked hard on their farm. Nolan graduated from Anamoose High School in 1948. He attended college in Dickinson, North Dakota.

Nolan joined the North Dakota National Guard where he served 19 years, retiring with honor at rank of Captain. He served active duty at Fort Belvoir, Virginia. His officer training was completed there. Nolan was given command of Harvey, North Dakota National Guard. He served his country with honor. Nolan loved God, family and his fellow man. His sense of humor was a joy to family and friends. No matter the situation his humor, fun with jokes, and respect of people, lifted spirits and brought smiles.

He married Jane Lundgren of Williston, North Dakota; who he met at Baptist Bible Camp in Lake Metigoshe, North Dakota. They were married June 26, 1959, at First Baptist Church in Portland, Oregon where she lived with her parents. Following their marriage, they returned to Anamoose and lived on the farm. They had two daughters Naomi and Dori. When it came time for special education for Dori,  Nolan knew they would need to move to wherever it was available. Nolan accepted a position as FMC Sales Manager of 7-state area, enabling his family to move wherever Dori and Naomi could receive the best education. In Brookings, South Dakota he and Jane started a group home for developmentally challenged residents.

They moved to Gillette in 1991. Nolan and his family were members of First Baptist Church. He served as deacon for many years and taught Pioneer Club young people. Nolan’s hobby was building quarter scale model airplanes. He and Jane organized a Gillette National fly-in for model fliers from United States and foreign countries. After retirement he worked fun-jobs as greeter at K-Mart and Wal Mart.

To order memorial trees or send flowers to the family in memory of Nolan Dean Bartz, please visit our flower store.