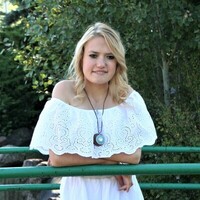 On March 19, 2022 with her family by her side, our most precious angel Nicole Kienzle passed away at the Children’s Hospital in Denver, CO due to a staph infection that infected her heart valves and other organs. Her death was very sudden and completely unexpected.

Nicole was born on September 23, 2001. Diagnosed with a heart condition called Truncus Arteriosis, she endured 3 open heart surgeries over the next 8 years. Nicole was also diagnosed with Scoliosis around the age of 9 and had several surgeries to correct that. There were other surgeries she had as well, but was otherwise as healthy as can be with two prosthetic heart valves.

Nicole grew up in Gillette, WY, attending Conestoga Elementary, Sage Valley JH and Thunder Basin HS. She graduated from TBHS in 2020 during the Covid year. Once Nicole put on her graduation gown she stated “I’m never taking this off!” She was so proud of her time at TBHS and was their biggest fan. She attended two additional years that helped her catch up to her peers.

Nicole was kept busy during her years with Girl Scouts and Cheerleading.  She was not able to play most sports due to her conditions. Nicole was a Girl Scout for 5 years while earning multiple badges, selling lots of cookies, and because she was so sweet and cute, her cookie sales could not be turned down.   As she transitioned to Junior High she retired from Girl Scouts and began a career in cheerleading that would drive her for the next 8 years. Her cheer coaches worked with her physical disabilities and always allowed her to perform to her abilities, while safely pushing her to be better at the same time. Nicole made so many friends through cheerleading; the entire experience had such a profound impact on her life. She gained confidence and plenty of sassiness through both of these activities which helped shape her to the beautiful young lady you know today.

When school was not in session, you may be surprised to know she actually did have other hobbies and interests that didn’t include her cell phone! She was the best fishing buddy one could ask for, fished off the shore or out of the boat and many times out fished everyone else. She had a focus like no other until she got warm and cozy enough for a fisherman’s nap. She loved to go camping, Big Horns, Black Hills or anywhere the camper was setup. Campfire, hot dogs, s’mores and coffee were her favorite.

Coffee? Oh yeah, that was a must every single morning. But only the Half-Caff, the regular coffee made her heart race too much. This habit started in JR High sometime, and quickly grew into a City Brew habit. Thankfully she got past that stage and settled on Mr. Keurig.  French Vanilla stock took a hit once she gave up that slight addiction later on.

Nicole was an animal lover, having pets such as a dog, cat, fish and a mouse named Oreo. She helped her mom with grooming dogs from time to time, and loved all those critters. Her sweet personality allowed her to have caring relationships with her many pets.

If there is one last thing to say about Nicole, it is that she touched so many lives. If you knew her, you loved her. Her presence just made you feel better about yourself. She was always kind, compassionate and sweet as can be, with a little bit of sass thrown in for good measure.  She had one of the best sense of humors one could ask for and will be dearly missed by so many. Her time on earth was just way to short. She had hopes and dreams for her future that she will sadly never get to experience. While Nicole is now gone, she will never be forgotten.

Nicole is survived by her parents, John and Cari Kienzle, her two brothers Ryan and Christopher Kienzle, and nephew Jasper. Grandparents Jim and Florence Welsh, Skip and Linda Campbell, Bruce and Ann Zimmershied, and Bessie Kienzle. Several cousins, aunts and uncles who will miss their time with her. A memorial fund will be setup at a later date in her name to help fund her most favorite pastime, cheerleading at TBHS.

To order memorial trees or send flowers to the family in memory of Nicole Ellen Kienzle, please visit our flower store.