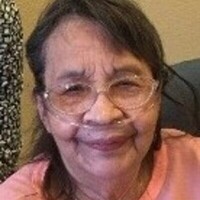 Funeral Service for Myra Sweet will be held Friday, June 11, 2021 at 9:00 a.m. at Gillette Memorial Chapel in Gillette, Wyoming with Deacon Kim Carroll officiating.  Myra passed on June 4, 2021 at the age of 77, at the Billings Clinic in Billings, MT of natural causes.  Myra was born in Belcourt, North Dakota in September 20, 1943 to Phillip Bottineau and Elizabeth Peltier.  She was the youngest girl out of 9 children total. Myra grew up and went to school in Belcourt, ND before meeting Joseph Allen Sweet.  They married on June 6, 1966 and had four children.  Gail Bunce, Darin Sweet, Stacey Sweet, and Christopher Sweet.  Myra stayed home to raise her children over the years.  Myra enjoyed playing bingo and crafting.  Myra is survived by a sister, Alice Amyotte, her four children, three grandchildren, and one great-grandchild.  She was preceded in death by three brothers and five sisters.  Myra was also preceded in death by her husband Joseph Sweet.  Memorials and condolences can be sent in Myra’s name in care of Gillette Memorial Chapel, 210 West 5th Street, Gillette, WY 82716.  Condolences may also be expressed at www.gillettememorialchapel.com

To order memorial trees or send flowers to the family in memory of Myra J Sweet, please visit our flower store.