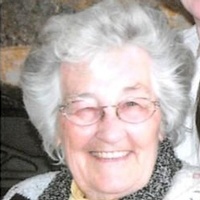 Mona Elizabeth Welter, 91, passed away peacefully in Monday March 18, 2019 at the Legacy Living and Rehabilitation facility following a long battle with vascular dementia.

Mona was born in Plentywood, Montana on July 13, 1927 to John and Vivian (O’Toole) Boulds. She attended school in Plentywood and graduated high school in 1945.

In 1946 she married Roy Welter and they raised four children while living in Plentywood and later in Forsyth. Mona and Roy owned and operated several businesses in both communities.

In 1968 the pair and their youngest child moved to Gillette Wyoming in the midst of the boom. They opened the A&W on 2nd street. They worked many long hours getting the A&W in shape to open doing most of the necessary remodel themselves. The business prospered, both Mona and Roy always believed coming to Gillette was the best move they ever made. By 1975, Roy had developed rheumatoid arthritis, so they sold the business and retired.

Mona quickly discovered that she wasn’t ready for retirement and ventured into real estate, passing the certification exam to be a real estate agent on the first try. This is where she met her dear friend Donna Mae. Mona found that selling real estate wasn’t her thing and determined that she really preferred owning it. With the help of Diamond Donna, Mona purchased several properties, flipped a few homes and entered into the mini storage business.

Mona had a passion for reading, sometimes reading a book in a single sitting. She was also, a gifted seamstress making many of her own clothes. Through the years, she was active on several boards and attended mass at Saint Mathews Catholic church regularly.

Mona was the sort of person that loved life and lived it to the fullest. Any one that met her could always remember their first meeting because she had such an out-going “no nonsense” personality.

She was preceded in death by her parents, husband, three sisters and three brothers.

In lieu of flowers, memorials may be made to Legacy Walk to End Alzheimer’s, Saint John Paul II School, the Legacy Living and Rehab activities department or the charity of your choice. Memorials and condolences may be sent in care of Gillette Memorial Chapel 210 West 5th Street, Gillette, WY 82716. Condolences may also be expressed at www.gillettememorialchapel.com

To order memorial trees or send flowers to the family in memory of Mona Elizabeth Welter, please visit our flower store.