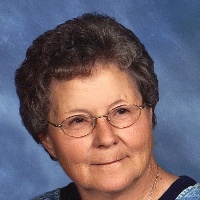 Joan Geer, 83, went to be with her Lord on April 5, 2019.  She was born Mildred Joan on July 20, 1935 (at the old Gillette Hospital up the hill to the west of what is now Twin Spruce Junior High School, on 7th Street) and was the first child of Theodore (Ted) and Elsie (Mooney) Percifield.  Joan lived her entire life in Campbell Co Wyoming except for a brief period of time during World War II when her parents moved the family to The Dalles, Oregon and Upton, WY.   She attended school at Gillette elementary/junior high and began classes at Campbell County High School. On February 17, 1952, she married Robert (Bob) Perry Geer at the old Gillette Presbyterian Church. Joan took correspondence courses and graduated with her class.  Bob and Joan began their married life together on Hoe Creek off of Highway 50 in a home purchased from Bob’s cousin, Harl Geer.  To this union, three children David, Darel, and Roberta were born.  The family initially lived at the Hoe Creek residence and later relocated to the home they built together on the Clarkelen Road. Joan held a number of jobs, having worked at a local café, as an usher/ticket sale at the Fiesta Theater, a hospital candy striper, as a telephone operator for Mountain Bell, and for several doctors.  She was also a homemaker and ranch wife, who supported her children through their 4-H and sports activities.  Joan worked in various administrative support positions for the Campbell County Memorial Hospital, retiring after 25 years of service.   As a voracious reader, Joan enjoyed many book series, particularly those authored by locals Craig Johnson and CJ Box.  Amish themed books were also of interest to Joan. She was a member of the Wyoming Farm Bureau Federation and a lifelong member of the Savageton Homebuilders Club.  Joan enjoyed jigsaw and word puzzles, knitting, cross stitch (which was ribbon worthy) and also played the accordion.  Joan was a fan of the Colorado Rockies and a staunch Wyoming Cowboys football supporter who participated in the Steer-of-The Year program.  Joan enjoyed traveling and was able to visit Canada, Mexico, and Australia.  She traveled throughout the United States with Branson, MO being one of her favorite locations along with anywhere the Pokes played pigskin. Joan was baptized at the age of 10 and continued growing her love for Christ. For many years and up until her passing, she and Bob regularly attended the Adult Sunday School Class at New Life Wesleyan Church. Joan will be remembered as an amazing wife, mother, grandmother, great-grandmother, and friend, one who loved holding babies and who had an amazing relationship with the Lord. She is survived by her loving husband, Robert; sons David (Diana Wilsey) Geer of Cheyenne, WY and Darel (Beryl) of Savageton, WY; son-in-law, Rick Douglas of Moura, Queensland, Australia; brothers Johnny (Barb) Percifield and Jerry (Teresa) Percifield, sister Judy (Wes) Wile, and sister-in-law Deb Percifield all of Gillette, WY.  Surviving grandchildren are Sean (Vicki) Geer and Dani (Brian) Harmeyer both of Douglas, WY; Lex (Amanda) Geer of Savageton, WY; and Andrew (Lindsay Serfazo) Anderson of Joliet, MT.  Joan has seven surviving great-grandchildren and numerous nieces, nephews, and cousins. Preceding Joan in death were her parents, brother, Jimmy Percifield, and daughter, Roberta Joan Douglas. At her request, a family service was held at Walker’s Funeral Home on April 11, 2019 followed by graveside services at Bethlehem Cemetery with Pastor Marty Crump officiating.  A Celebration of Life will be held at the Family Life Church, 480 S. Hwy 50, Gillette, WY, on Thursday, May 30, 2019 beginning at 11:00 am.  Family and friends are welcome to attend to remember, reflect, and share fellowship.  The Savageton Homebuilders Club and Percifield cousins will provide lunch.

To order memorial trees or send flowers to the family in memory of Mildred Joan Geer, please visit our flower store.