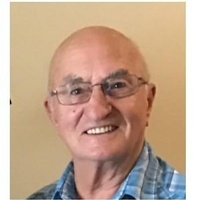 Mike Dean Haluzak, 85, passed away January 9, 2019 at The Legacy Living & Rehabilitation Center from natural causes.  Mike’s wishes at the time of his death were to be cremated.

Mike was born in Wilton, ND on November 24, 1933 to Sam & Ann Haluzak.  He was raised on the family farm and graduated from Wilton Public School in 1951.   Mike married Murriel Krush on June 23, 1954 and they later divorced.  The couple had 3 children together, Deborah, Roger and Connie Haluzak.

Mike later married Helen Armstrong on November 29, 1985.  They moved to Gillette, Wyoming where Mike continued to work.  They later moved back to Dunseith, ND after Mike’s retirement from construction and were married until the time of Helen’s death in 2008.   After Helen’s death he moved back to Gillette, Wyoming and lived with his son and daughter in law, Roger & Colette Haluzak, until he entered the Legacy Living & Rehabilitation Center in the memory care section.

Mike was proud of the jobs he held.  He worked at Farmers Union in Wilton, Bismarck Contracting (Division of Clarimont Construction) and Phillips Welding in Gillette, Wyoming.  He worked construction until his retirement.   He enjoyed being active and was always riding his bike or walking.  In his younger years he enjoyed riding his motorcycle and Broncs in rodeos.  He also enjoyed fishing and golfing.

He is proceeded in death by his first wife, Murriel Krush; his second wife, Helen Haluzak; daughter, Deborah Schuler; brother, John Haluzak; and his parents, Sam & Ann Haluzak.  Memorials and condolences may be sent in care of Gillette Memorial Chapel 210 West 5th Street, Gillette, WY 82716. Condolences may also be expressed at www.gillettememorialchapel.com

To order memorial trees or send flowers to the family in memory of Mike Dean Haluzak, please visit our flower store.