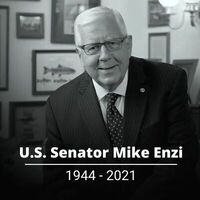 Mike Enzi was born February 1, 1944 to Dorothy and Elmer Enzi in Bremerton, WA.

While he wasn’t born in Wyoming, he always said he got there as quick as he could.

He learned many lessons in his schooling in Thermopolis, Sheridan, George Washington University, and Denver University, and continued his learning through career options and prolific reading. He wrote a book report for each book he read and took his situational learning on to new scenarios throughout his life.

Faith was important. He lived his Faith in church attendance (wherever he was in the world), as a high school Sunday school teacher, through his daily devotionals, his weekly prayer breakfast meetings, National Prayer breakfast, and sharing how God provides.

Aside from his decision to follow Christ, the next best decision he ever made was marrying Diana.

Family meant everything. From his parents, sister Marilyn, cousins, and grandparents, he learned the importance of family.  He extended those lessons when he married Diana June 7, 1969 and opened NZ Shoes in Gillette. He had three children, Amy (Mike), Brad, and Emily (Mike). He had four grandchildren: Trey, Lilly, Megan, and Allison. Grampa proudly held them each on the day they were born. He built a treehouse for them. He proudly participated in all family activities, even when he had to drive all night to do so. Family was precious to him.

Friends— He had a vast collection of friends he cherished. He was always pleased to spend time with friends at various events throughout his life. This included the more than 200 members of "Team Enzi" who worked for him over his many years in public service, which he and Diana supported like a family.

Some of his accomplishments that he was most proud of included being a husband, dad, Grampa, friend, Eagle Scout, soccer coach, basketball fan, Scout leader, Air National Guard veteran, mayor, legislator, and U.S. senator.

He enjoyed legislating and working to find solutions and often touted his 80/20% tool to solve problems, where he advocated focusing on the 80% of an issue people agreed on and leaving out or finding another way to work on the 20% that was more contentious.

Mike’s passion was fishing. He didn’t go anywhere without a rod and reel and a spare. It was not uncommon for him to pull over and cast his line as he traveled Wyoming.

Mike passed away peacefully on July 26, 2021, surrounded by his family. He left us with important lessons: Faith, Family, Friends, and Fishing, TIGAPA— Trust in God and push ahead—, and the mission statement: "Do your best. Do what’s right. Treat others as you want to be treated."

In lieu of flowers, memorials can be made to Project Mercy, Mike and Diana Enzi Scholarship Fund at the University of Wyoming, and the Wyoming Community Foundation Mike & Diana Enzi Charitable Fund.

Celebration of life  for Mike Enzi will be held at 1:00 p.m., Friday, August 6, 2021 at Pronghorn Center 3807 College Dr. Gillette, WY; with Pastor Donavon Voigt officiating. In lieu of flowers, memorials can be made to Project Mercy, Mike and Diana Enzi Scholarship Fund at the University of Wyoming, and the Wyoming Community Foundation Mike & Diana Enzi Charitable Fund. Memorials and condolences may be sent in Mike’s name in care of Gillette Memorial Chapel 210 West 5th Street, Gillette, WY 82716. Condolences may also be expressed at www.gillettememorialchapel.com

To order memorial trees or send flowers to the family in memory of Mike Enzi, please visit our flower store.