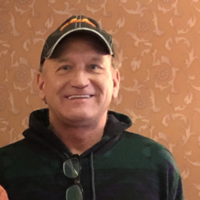 Michial DeWayne Brown was born on December 6, 1965, the son of Don and Betty Brown and Kathy Izzard in Gillette. Known to his friends and family as Mike, he was raised and educated in Gillette. Mike attended Mrs. Reimer's private kindergarten class, followed by elementary school and then attending and graduating from Campbell County High School. After graduation Mike attended Casper College for a time. He returned to Gillette and joined the workforce, working in the oilfield, driving truck for several years and later going to work at local coal mines until the time of his death.

Mike enjoyed playing his guitar and golfing, but his favorite pastime was his motorcycle.

Memorials are suggested to benefit Campbell County Suicide Coalition, donations can be sent in care of Gillette Memorial Chapel, 210 W. 5th St., Gillette, WY 82716. Memories and condolences can also be shared via the internet at www.GilletteMemorialChapel.com.

To order memorial trees or send flowers to the family in memory of Michial D. Brown, please visit our flower store.