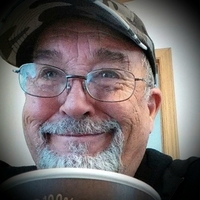 Memorial service for Michael Wipf will be held at 3:00 p.m., Friday, October 18, 2019 at Walker Funeral Home. Michael James Wipf age 70, of Gillette, formerly of Rapid City, South Dakota died October 5, 2019 at his home. Michael was born first of five children, on October 2, 1949 to Joseph J. Wipf and Delores (Morrison) Wipf in Huron, South Dakota.  Michael graduated from Central High School in Rapid City in 1968. He married Linda Kay Wirshing June 7, 1969 in Rapid City, SD. The couple had 4 children. They recently celebrated their 50th wedding anniversary surrounded by many friends and family. Michael started working for Burlington Northern Railroad in 1973, then took the buy-off in 1991 to pursue his dream of working with wood.  He and his wife ran Little Furniture and Things until he took a job with Powder River Transportation in 2002. He loved taking the miners to and from the mines. He took great pleasure in driving the school kids to their games out of town, and charters of tourists to Yellowstone National Park. He retired from Powder River Transportation in 2014 but continued to work part-time for them until his passing. He loved talking about God to anyone who would listen.  He loved to ride his Harley, he said he was just needing some oxygen.  He would often take his dogs to the park to run, this gave him some time to talk to God or just soak in the sunshine. He especially loved family gatherings. Survivors include his parents Joseph J. Wipf and Delores (Morrison) Wipf of Rapid City SD. His wife Linda Wipf of Gillette WY; daughters, Julie (Gary) Haptonstall Douglas, WY; Windie Curtis, Jammie Walker and son, Travis Wipf all of Gillette WY.  His siblings, David (Lisa) Wipf of Rapid City, SD; Peggy (Gerrit) Gaulke of Gillette WY; Diane (Chris) Walla of Cheyenne, WY; and Scott (Trish) Wipf of Venice, FL.  As well as eight grandchildren and one great grandchild. He was preceded in death by a grandson, Jackson William Walker; infant son of Jammie and Justin Walker. Memorials and condolences may be sent in Michael’s name in care Walker Funeral Home 410 Medical Arts Court, Gillette, WY 82716.  Condolences may also be expressed at www.walkerfuneralgillette.com.

To order memorial trees or send flowers to the family in memory of Michael James Wipf, please visit our flower store.