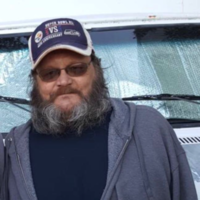 Funeral services for Michael (Mike) Jay O’Brien will be held at 2:00 p.m., Wednesday, November 4, 2020 at Gillette Memorial Chapel. Visitation will be held Tuesday, November 3, 2020 from 4:00 -7:00 p.m. The services will be live-streamed at www.gillettememorialchapel.com . Mike O’Brien, age 63, passed away on October 29, 2020 from renal failure at Central Wyoming Hospice, Casper, WY.  He was born October 7, 1957 to Michael O’Brien and Ruth Blake in Farmington, New Mexico. In 1968 his family moved to Gillette, Wyoming for the oil fields. In 1969 his mother married Delbert Blake. Growing up Mike enjoyed wrestling, fishing, and having a fun time. He was most known for his ornery and comical personality. He worked most of his life in the Oil Fields. Mike met Crystal Haukaas and had Trevor in 1995 and Melissa in 1998. He had lifelong friends who will all remember watching football games or NASCAR races together. Both friends and family will remember him as a fun time to be around. In 2018 he became a grandfather, and nothing made him prouder. Mike is survived by his daughter, Melissa (Kody) O’Brien; brothers, Larry (Dianne) Dayhoff; Randy (Carol) Dayhoff; Jim (Sharron) O’Brien; and Mark (Deborah) Blake; sister, Vonda (Dan) Jordan; grandson, Gunner Raleigh, and numerous nieces and nephews. He is preceded in death by his son, Trevor O’Brien; dad, Delbert; father, Mike O’Brien; mother, Ruth Blake; sister, Margie Beauchamp; stepbrothers, Aaron and Andy Blake and grandparents. Memorials and condolences may be sent in care of Gillette Memorial Chapel 210 West 5th Street, Gillette, WY 82716. Condolences may be sent via the internet at www.gillettememorialchapel.com

To order memorial trees or send flowers to the family in memory of Michael Jay O'Brien, please visit our flower store.