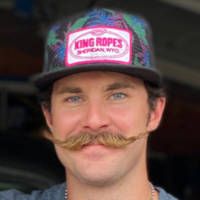 Memorial service for Michael Jeffers will be held at 11:00 a.m., Saturday, January 23, 2021 at Gillette Memorial Chapel with Pastor Ernie Bishop officiating.  Michael Bryan Jeffers was born October 19, 1992 in Atwood, Kansas to Ceri Pierce Jeffers and Jim Jeffers. He died unexpectedly January 16th, 2021 to natural causes in Gillette, Wyoming. During his school years he grew up in Colorado and started his love for bull riding, wrestling and football. In Jr. High he moved to Arizona and continued to rodeo and play football. He was quite the athlete. Someone even made a fake Facebook Athlete page posing as Michael, which made many people including Michael chuckle. He pursued his passion in rodeo and moved to Kansas where he gained many friends and his love for stock contracting and bull fighting. That is where he met Marie and they went on to have two beautiful daughters Tay and Fin. He was an amazing father. After moving to Wyoming, he started his job at the coal mine and opened his heart even further and met the love of his life Tierney and her daughter Sonora, which soon became his daughter as well. Michael and Tierney were joined in matrimony after she fell in love with his beautiful blue eyes on January 2, 2021 forever joining their two families together. Michael was known for his kindness and patience. He was the type of man who you couldn’t help but love. He would light up the room no matter how bad your day was. He loved kids and helping others which flared his passion for bull fighting especially at the Junior Rodeos and charity rodeos. He was a family man who worked hard and always put his family first. He was loved by many and will be greatly missed. Michael was so humble that he truly didn’t understand how special he was. The world will not be the same without him in it, but Heaven gained a truly incredible angel. He is survived by his wife, Tierney Jeffers; three beautiful daughters, Tay, Sonora and Fin and a baby on the way which he was extremely excited about; parents Ceri and Jim Jeffers; sister Vicki (Schyler) Wells; niece Abby; grandparents, Marilyn and Dean Pirrie; aunt Ashley; grandparents, Raymond and Darla Jeffers; and many aunts, uncles, cousins and close friends who became family. He was preceded in death by his grandfather, Reggie Pierce; uncle, Caleb Pierce; grandparents, Deyo and Viva Jeffers and Opal Pierce. In lieu of flowers the family request that memorials be made to benefit Tierney and his children. Donations can be made to Gillette Memorial Chapel 210 West 5th Street, Gillette, WY 82716. Condolences may also be expressed at www.gillettememorialchapel.com

To order memorial trees or send flowers to the family in memory of Michael Bryan Jeffers, please visit our flower store.