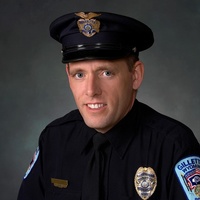 Funeral service for Michael Fischer will be held at 1:00 p.m., Monday, October 8, 2018 at New Life Church with Chaplain Gordon Harper officiating. Visitation and family gathering will take place from 12:00 p.m. to 4:00 p.m., Sunday, October 7, 2018 at Gillette Memorial Chapel. Michael “Fish” Bernard Fischer died Saturday, September 29, 2018 at his home in Gillette, WY. Mike was born October 24, 1964 in Minneapolis, Minnesota to Henry and Ann (McKenney) Fischer. Mike graduated from the University of Minnesota. After graduation he moved to Wyoming where he served for 30 years as a Gillette police officer. He served many years as a Patrol Office and later for 3 years as a School Resource Officer. Mike was an avid hunter, was skilled at home repairs and was also known for baking cookies and other treats for his family, friends and coworkers. Mike always had a smile on his face and was known to occasionally play harmless pranks. Mike will be lovingly remembered by his step-mother, Doris Fischer; his brother, Joseph (Sheila) Fischer; his three sisters, Mary Fischer; Helen (Steve) Ballinger; Grace (Janet) Fischer-Schneider; and his two nephews Patrick and Leo. Michael is preceded in death by his father and mother. In lieu of flowers memorials may be made in Mike’s name to YES House or Campbell County DARE Program. Memorials and condolences may also be sent in Mike’s name in care of Gillette Memorial Chapel 210 West 5th Street, Gillette, WY 82716. Condolences may also be expressed at www.gillettememorialchapel.com

To order memorial trees or send flowers to the family in memory of Michael Bernard Fischer, please visit our flower store.