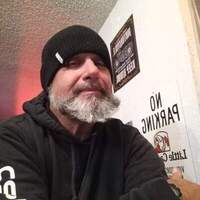 Michael Clark, 52, passed away Thursday, September 22, 2022 in his home from unknown causes. Michael Shane Clark was born September 22, 1970 to Clarence and Beverly (Bussell) Clark in Dayton Ohio. As a young boy the family moved to Bradenton, Florida where he attended school. Upon finishing school, Michael experienced and sampled life. He traveled some and worked when opportunities came. In 2017 he acquired his CDL and found his career with truck driving. Not only was Michael really good at driving, but he really enjoyed the traveling aspect. He moved to Gillette about 8 years ago and this was truly where he called "home". Here in Gillette he met Rebekah Rakstad and together they built their life together including her son Seth. Their love for RC cars lead to building an RC track to race on! They loved their ATVs and spent as much time as they could riding around the Weston recreation area. He enjoyed NASCAR and his Harley, who he affectionately named "Sexy"! Often you could find him cheering for the Steelers, tapping his foot to some blues or masterfully playing the guitar; his favorite artist was Stevie Ray Vaughan. Michael had an artist spirit and could create beautiful portraits with any and all types of media. This spirited man will be remembered most for his big heart and loyalty to those he loved.

He is survived by his mother Beverly Gehle; stepfather, Jerry Didier; sisters: Christina Clark-Kenworthy, Kelly Pahl and Monica Castle; brothers: Jacob Clark, Jessy Clark; significant other and best friend Rebekah Rakstad; her son, Seth; many aunts, uncles, cousins, and countless friends from across the country. He was proceeded in death by his father Clarence Clark; sister, Heather Clark; grandparents: Harrison and Genevieve Bussell; Carl and Audrey Clark. Memorial services will be held at a later date. Memorials and condolences may be sent in care of Gillette Memorial Chapel 210 West 5th Steet, Gillette, WY 82716. Condolence may also be expressed at www.gillettememorialchapel.com

To order memorial trees or send flowers to the family in memory of Michael Shane Clark, please visit our flower store.