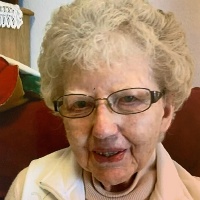 Graveside service for Meryle Clement will be held at 1:00 p.m., Tuesday, September 3, 2019 at Sunset Memorial Gardens in Billings, MT. Memorial services will be held at 3:00 p.m., Saturday, September 7, 2019 at The Legacy Living and Rehabilitation Center Chapel in Gillette, WY with Pastor Gordon Harper officiating. Meryle J. Clement, 100, of Gillette, WY, went home to Heaven Thursday, August 22, 2019, in the loving presence of her family (after complications from a fall a week earlier).

Meryle was the first of three daughters born to Andrew and Grace (Bailey) Teterud. Her birthday was July 1, 1919 and was born in Great Falls, MT. In her younger years she lived on the family ranch. Meryle loved telling stories of life there. Milking the cows, chasing chickens, or getting a quick ride on the back of a ram helped all of us see how she got the nickname “Red!” She had beautiful red hair and the personality to go with it!

Meryle graduated in 1936 from Cut Bank High School. She enjoyed activities with her friends like ice skating, going to dances and socializing. Growing up she had worked at the courthouse, and then decided to get her secretarial degree in Spokane, Washington. On the 20th of May, 1938 she graduated from Kinman Business University.

Meryle married Edward (Bud) Clement March 14, 1944 in Cut Bank, MT. They started their marriage in a tiny R.V. In 1947, she and Bud moved to Billings, MT where Bud worked in sales. At one point they owned and ran a tire business. Their son Drew was born in 1948, and daughter Deanna was born in 1952. Meryle had a variety of jobs in Billings. She worked in an office, stayed home raising her two children (Drew and Deanna), gave accordion lessons, and worked retail at K-Mart from where she eventually retired.

Meryle and Bud enjoyed dancing and went almost every New Year’s Eve. He preceded her in death on May 5, 1976. She is now reunited with Bud and enjoying eternity with her Savior.

Meryle lived in the same house in Billings for over 50 years. She loved the color green, gardening, lilacs, roses, and raspberries were plants she enjoyed! She loved her sister, kids, grandkids, and great-grandkids! Meryle was her sister’s (Aryss) caregiver for over 20 years. She took care of her well into her 90’s while living in Billings. In 2015, Meryle and Aryss came to Gillette and lived at Willow Creek Assisted Living. Meryle’s sister, Aryss, suffered a stroke and needed a little more care. In 2016, Aryss was blessed to make The Legacy her new home.

We had many hours of visiting, watching HGTV, playing Crazy 8’s, and participating in Bingo, which paid out in one of her favorites: Hershey chocolates. Meryle enjoyed coloring and filled many books with her handiwork. She loved giving away a finished picture. Into her late 90’s she still enjoyed riding her stationary bike. Our family was blessed to have her close in the last years of her life. Meryle was proud to be 100 years old!!

To order memorial trees or send flowers to the family in memory of Meryle Jean Clement, please visit our flower store.