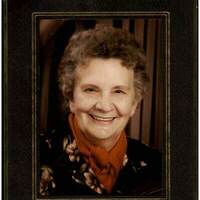 Memorial service for Maxine Edlund will be held at 2:00 p.m., Friday, March 18, 2022 at Walker Funeral Home with Chaplain Gordon Harper officiating.  Maxine F Edlund, age 96 passed away March 3, 2022, at The Legacy Living and Rehabilitation Center in Gillette, WY. Maxine was born April 5, 1925 in Scobey, MT to Frank and Myrtle (Steen) Shanks. Maxine was the 9th child of 12. She was raised and attended schools in Bainville, MT. She married Francis William Murray in 1943 and had 7 children. Married Robert Broach in 1978 and Dale Edlund in 1987. Maxine loved all forms of art and was an incredible painter and quilter. Her many paintings and blankets will carry on her legacy for a many years to come. But above all else she loved the Lord and her bible. She is preceded in death by her parents, Frank and Myrtle Shanks, her siblings, Helen Shanks; Virgil Shanks; George Shanks; Everett Shanks; Lenard Shanks; Marvin Shanks; Glen Shanks; Arthur Shanks; Ruby (Shanks) Olson; Frank Shanks; and Norman Shanks, children; infant Marla Murray and Paulette (Murray) Nordwick. She is survived by children, Chester (Marla) Murray; Carla (Robert) Erickson; Kelly (Charlotte) Murray; Lili (Morris) Hunter; and Sheldon (Dena) Murray; 17 grandchildren and many great-grandchildren. Maxine will be buried in Murray cemetery in Homestead, MT in the spring. We will have a small family gathering at that time. Memorials and condolences may be sent in care of Gillette Memorial Chapel 210 West 5th Street, Gillette, WY 82716. Condolences may also be expressed at www.gillettememorialchapel.com

To order memorial trees or send flowers to the family in memory of Maxine Fern Edlund, please visit our flower store.