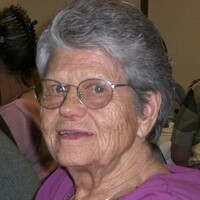 Graveside service for Mary Schlautmann will be held Thursday, April 9, 2020 at Savageton Cemetery; Father Cliff Jacobson officiating. Visitation will be held from 4:00 p.m. to 7:00 p.m., Wednesday, April 8, 2020 at Gillette Memorial Chapel.  To protect the health and safety of all, we are limiting our visitation numbers to 10 people in the building at one time, as required by state and local authorities and the CDC. A Memorial Mass will be held at a later date at St. Matthew’s Catholic Church, once the COVID 19 restrictions are lifted.

Lifetime resident of Campbell County Mary Ellen Schlautmann passed away peacefully early in the morning of April 1, 2020. The world was a better place because she was among us for over 93 years as evidenced by her large extended family and countless friends who had the pleasure of knowing her over the years.

Mary was born on her grandparents homestead south of Gillette, Wyoming on September 18, 1926 to Walter and Bethel Cohee.  When she was sixteen, she dropped out of high school in Gillette to help support her family as a waitress.  Later during WWII she moved to Casper and trained as riveter on airplanes to help the war effort but her father forbid her to continue this career.  When her sister Dena moved to California because her husband was stationed there in the Navy, she joined Dena and picked grapes to earn a living. She later returned to Gillette and went back to work waitressing where she met Albert Schlautmann in the very restaurant where she was a waitress.  Mary liked to tell the story of her first date with Albert when he took her on an airplane ride and she accidentally sat on the new Roy Acuff record album he had just bought her as a gift.  It was the end of the record, but the beginning of a relationship and soon a marriage that lasted more than 60 years.

On October 26, 1947 she married Albert and lived the majority of her life on the Schlautmann family ranch south of Gillette.   Mary was a proud rancher and avid gardener who had a full life raising her seven children, as well as bum lambs, orphaned calves and countless baby chickens.  She loved all animals, and in spite of being allergic to cats and dogs, was always surrounded by her beloved border collie dogs and adopted many homeless cats.  Anyone who visited Mary at the ranch was amazed by her green thumb as she tended to a huge family garden and grew an oasis of beautiful of trees and flowers.

Mary was a member of Campbell Cattlewomen, devoted member of St. Mathews Catholic parish, and generous supporter of many charitable organizations.

She was proceeded in death by her husband, her parents, five sisters, three brothers, two grandsons Jacob Saunders, and William Schlautmann, and granddaughter Rachel Schlautmann.

In lieu of flowers, the family requests that memorials be made in Mary’s name to St. Mathews Catholic Church.  Memorials and condolences may also be sent to Gillette Memorial Chapel 210 West 5th Street, Gillette, WY 82716. Condolences may also be expressed at  www.gillettememorialchapel.com

To order memorial trees or send flowers to the family in memory of Mary Ellen Schlautmann, please visit our flower store.