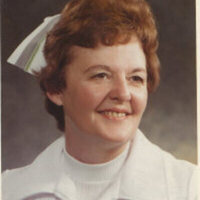 Mary Helen (Golberg) Maki, 92, wife of the late Roy Harold Maki of Bergland, Michigan passed away December 28, 2020 at The Legacy Living and Rehabilitation Center in Gillette, Wyoming from complications of Covid 19.  Mary Helen was born March 14, 1928 in Ewen, MI and was the oldest daughter of Catherine Helen (Livingston) Golberg and Andrew Martin Golberg.  She grew up on a small farm in Matchwood, MI with her siblings Andrew and Mary Inga.  Her mother, Helen, was the oldest of 17 children, Mary Helen had many cousins and they roamed the nearby Norwich Bluffs. The family moved to St. Cloud, MN during Mary Helen’s middle school years and she said she was a strong swimmer, because she learned how to swim in the Mississippi River.  They moved back to the farm and Mary Helen attended high school in Bergland, MI where she met Roy Maki. He was the captain of the basketball team and she was a cheerleader.  They were married August 20, 1947.  Roy was a telegrapher on the Soo Line Railroad and they followed Roy to where he was stationed around the Midwest.  Mary Rennette (Rennie) was born in 1950 in Waukegan, IL and Roy Bryan (Bryan) was born in 1953 in Waukegan.  In 1954, the family moved back to Ewen, MI and Roy partnered with his brother, Wilbert, and his father, Bill, in the Maki Company.  Her son, James Harold (Smickers), was born in 1956.  Her daughter, Helen Marie (Heidi,) was born in 1960.  Mary Helen had three passions throughout her life; her music, her nursing career, and her family.

Heidi and Mary Helen sang in the choir known as The Sacred Heart Singers.  Heidi remembers her mother driving “The Big Blue Bus” with all the choir members to performances in churches throughout the Midwest and East Coast.  As they became known, they were invited to sing on television at Christmas.  Heidi and Mary Helen made one 45 record and three LP records with the choir of songs with original words and music. Her whole life, Mary Helen would sing wherever she happened to be and invited everyone to join her singing songs.

As their four children and ten grandchildren were growing up, Mary Helen loved to be with her family at their cabin on Lake Gogebic.  She would “make memories” by taking her grandchildren berry picking, camping trips, and even a 100-mile bike trip.  Being a strong swimmer, she taught them all to swim.  In the winter, she would take them to the Porcupine Mountain to ski. Mary Helen loved ice cream and every excursion included an ice cream cone.

Mary Helen was an active community member and one of the initial charter members of the Ewen Medical Clinic and the local ambulance service.  In 1974, she attended Gogebic Community College to pursue a nursing career.  Mary Helen was graduated on November 29, 1976 as a Licensed Practical Nurse by the Michigan Board of Nursing and as a Trained Practical Nurse in the State of Wisconsin.  In 1977, Mary Helen became a Licensed Ambulance Attendant by The States of Wisconsin and Michigan. She worked for the Ontonagon County Ambulance Service as an EMT.  In 1978, Mary Helen began working as an LPN for The Northwoods Living Care Center in Phelps, WI. Mary Helen continued to take classes to recertify her licensure until she retired January 23, 1984 from her medical career.

After retiring, Mary Helen and Roy spent many winters with good friends on the Padre Islands in Texas.  After Roy passed on February 4, 2013, she moved to WY with her daughter, Rennie, spending her summers in Ewen, MI with Bryan and Sandy.  September 1, 2018, she became a resident at The Legacy Living and Rehabilitation center, where she remained until her passing.  She was preceded in death by her parents, sister, brother, and sister-in-law.  She never recovered from the passing of her husband, Roy, and her son, Jim.  She is survived by her daughter, Mary Rennette (Mack), son, Roy Bryan (Sandra), and daughter, Helen Marie (Kim).  She is survived and loved by her grandchildren; Shane (Beth), Jacob (Amy), Reverend Christopher (Kari), Jed (Brittany,) Jordy, Luke, Lacie and Nickolas.  She will be remembered by her great grandchildren; Nicholas, Kyle, Cole, Jordyn, Quinn, Tinsley, Ailyn, Kinley, Shay, Garrett, and Royal.

Mary Helen’s celebration of life will be held at 9:00 a.m., Wednesday, January 20, 2021 with a Funeral Mass at St. Matthew’s Catholic Church in Gillette, Wyoming and a celebration of her life with her family at St. Ann’s in Bergland, MI, with the date to be announced.  Mary Helen will be buried at the Ewen Evergreen Cemetery beside her husband, Roy, as promised. Memorials and condolences may be sent in care of Gillette Memorial Chapel 210 West 5th Street, Gillette, WY 82716. Condolences may also be expressed at www.gillettememorialchapel.com

To order memorial trees or send flowers to the family in memory of Mary Helen Maki, please visit our flower store.