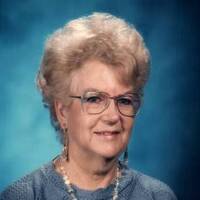 She was born June 28, 1930 in Emery, Utah to Orval and Leona Sorensen.  She spent her childhood on her parent’s cattle ranch, helping cook for crews and raising 4-H calves.  She graduated from South Emery High in Ferron, Utah in 1948.  She worked at the local general store in Emery and then for a time at Woolworth’s in Salt Lake City.

She married Gordon Kenneth Halvorsen on August 4, 1951 at her parent’s home in Emery. They later divorced.   She spent a year living in Germany while Gordon was stationed there with the Air Force, traveling to Germany alone on board a military cargo ship with her infant daughter Kathy. After the tour in Germany the family made their home in Aurora, CO where three more children were added to the family.  Mary Lou worked for many years in several retail establishments in Denver.

Mary Lou moved to Gillette, WY in 1978 and worked as a secretary at Powder River Pipeline, the Crude Company, and Texaco Trading and Transportation.  She attended computer and business classes at Gillette College for a year in 1984, then went to work for the Campbell County School District at Stocktrail and Pronghorn Elementary as a teacher’s aide until health issues forced her into retirement.

Her hobbies included jigsaw puzzles, reading, and counted cross stitch.   She loved county/western music, her favorite artists were Eddie Arnold and Marty Robbins.  She also loved cats and always had a cat companion.  She was a member of the LDS Church.

She will be remembered by her children as a loving mother who was brave, strong, and beautiful.  She sacrificed much for us and we will love and miss her always.

At her request in lieu of flowers please make a donation to the Gillette animal shelter.  Cremation has taken place and she will be interred at Mt. Pisgah Cemetery.  A family memorial will be held at a later date.

To order memorial trees or send flowers to the family in memory of Mary Lou Halvorsen, please visit our flower store.