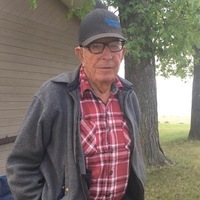 Memorial service for Marvin Frank will be held at 10:00 a.m., Thursday, December 23, 2021 at Gillette Memorial Chapel with Chaplain Gordon Harper officiating. Marvin Robert Frank, 93, of Gillette, WY passed away December 17, 2021, retiring his pilot car in heaven. Marvin was born March 4, 1928 in Farnam, Nebraska, the son of Chris and Emily (McMichael) Frank. Marvin was the oldest of five children. He grew up in Nebraska and Wyoming on the seat of his bicycle. His first marriage with Thelma (Hawkins) Frank produced three children; Marvin Lee Frank, of Casper, Sylvia Jean Jensen, of Casper and David Wayne Frank, deceased. Marvin served in the United States Army and was stationed in Virginia. He was such a hard-worker and could out-work anyone around him – even in his latter years. He worked many years as a roughneck in the oilfields around Wyoming and North Dakota. Marvin finally settled down when he met the love of his life, Billie (Wirth) Frank, whom he married in August 1968. He worked for the Wheatland Power Plant for years before retiring to drive Pilot cars. Marvin loved driving for Baysinger Trucking, and was their right-hand-man, for approximately 30 years and became family. Marvin worked and operated his pilot car and business until he no longer could at the age of 92. He was heartbroken and wanted to keep working. Marvin lived his last year at the Legacy in Gillette. Marvin loved to fish from his blue ’93 Spectrum boat and had many fishing stories and buddies – but he always made sure work was done first. Marvin was quite the ladies’ man and made friends wherever he went. He was always willing to give a hand – he would be the first to jump in and the last to leave. There was nothing that could slow him down. Marvin made an impact on many peoples’ lives – he was the dad, grandpa, brother, and friend that some never had. Marvin will be greatly missed by those who had the honor of having him in their lives. Memorials and condolences may be sent in care of Gillette Memorial Chapel 210 West 5th Street, Gillette, WY 82716. Condolences may also be expressed at www.gillettememorialchapel.com

To order memorial trees or send flowers to the family in memory of Marvin Robert Frank, please visit our flower store.