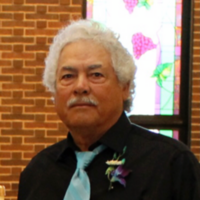 Martine Molina Erivez passed away at 12:05 pm on December 11, 2020 at Wyoming Medical Center in Casper, WY.  Martine was born on June 13, 1945 in Cuauhtemoc, Chihuahua Mexico to Juan and Eva Erivez.  Martine is one of eight children. He attended school until he was old enough to work and help his family.  He and two of his brothers, Lehi and Horacio, came to the United States in 1978 and worked in agriculture in Rocky Ford, CO. They moved all over the area doing construction jobs. Martin taught himself English while he worked in America.  During the Vietnam War his brothers and him worked at Fort Carson for the government building the underground bunkers, that supposedly don’t exist.  They traveled to Wyoming with stops in Casper and Gillette.  He returned to Mexico for a short time before he returned to Gillette and met Yvonne Petrik.  In December of 1983 they had a premature baby boy, Martine Molina Erivez Jr., Marty was born in Denver and Vonnie and Martin spent a lot of time down there while Marty was in the hospital.  Martin and Vonnie were wed March 25, 1984. In this union Martin gained four step children, Shelly, Mike, Kevin and Jamey Foster.

He worked as a concrete finisher for S&S Builders from 1983 till 2016 and then worked for Van Ewing from 2016 to 2019. Martin was known for being one of the best concrete finishers in the area.  His work ethic was admired by anyone he worked with. He worked until he was 74 in one of the most physically demanding jobs there is.  Martin did everything he could for his family.  When Martin wasn’t at work you could find him at Mona’s Restaurant or playing cards at the Otherside Bar.  The later years he spent taking care of Vonnie while she battled different cancers.  Martin’s truest joys came from watching his grandchildren grow.  Martin was very proud of his grandson that gets to carry on his name, Martine Molina Erivez III.  In April of 2020 his Vonnie lost her battle with cancer.  In June of 2020 Martin was diagnosed with multiple myeloma.  As a result of the cancer he had to start doing dialysis.  With the loving support of his family he was able to stay home and do his treatments until his passing.

Donations are suggested to benefit Gillette Soup Kitchen.  Memorials and donations may be sent in care of the Erivez family to Gillette Memorial Chapel, 210 W 5th Street Gillette, WY 82716. Cards and donations can be sent to the funeral home. Condolences may also be expressed at www.gillettememorialchapel.com

To order memorial trees or send flowers to the family in memory of Martine Molina Erivez, please visit our flower store.