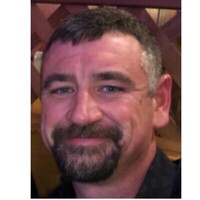 Funeral service for Marty McKee will be held at 11:00 a.m., Friday, April 24, 2020 at Gillette Memorial Chapel with Pastor Ernie Bishop officiating. To protect the health and safety of all, due to Covid 19 the funeral service will be for eight family members only.  We encourage you to view the service as it will be streamed live on our website; www.gillettememorialchapel.com; a link will be attached to Marty's obituary page. A family and friends gathering will take place from 1:00 p.m. to 5:00 p.m. after the service at 8 Daisy Street. Another celebration of life will be held at a later date with a big blow out party to send him off. Visitation will be held from 4:00 p.m. to 7:00 p.m., Thursday, April 23, 2020 at Gillette Memorial Chapel; this too we will only allow the limited attendance of 10 in the building at one time at a rotating basis; we encourage the wearing of personal protective equipment. Martin Tyler McKee, 42 passed away on Sunday April 19, 2020 from injuries sustained in a motorcycle accident.  Martin “Marty” was born October 9, 1977 in Webster, SD to Robert and Terri (Paul) McKee. He was big brother to a sister, Janice a few years later. Marty attended elementary school in Waubay SD. After the family moved to Gillette in 1988, he attended Sage Valley Junior High and graduated from CCHS in 1996. He then enrolled at WyoTech in Laramie and graduated with a certification in diesel mechanics. For the past 15 years Marty was honored and proud to be employed by Homax Oil. Through high school friends Marty met the love of his life, Amanda Sanders. They were married on May 29, 1999 in St Onge, SD and then settled in Gillette. He was her everything and in recent years he professed his love often by leaving notes in her gym shoes and loving texts every day. They were blessed with two sons, Kendall and Chance. Marty was so proud of his sons and wanted to be a good example for his boys, so he took up running and weightlifting. He was always there to cheer them on during sporting events but was just as proud of their artwork. He coached them in baseball, basketball, football, helped them with their wrestling moves to keep them keep fit during the summer. He recently purchased a punching bag and gloves so they could work on their upper body strength. Marty started riding a motorcycle before he was four. He loved fishing, swimming and boating, riding his Harley, having an active family life and his Grandpa Kendall. He was so proud to name his first son after Grandpa Kendall.  Marty was prone to playing golf, football or just wrestling around with the boys in the living room. Numerous pieces of furniture were tackled with less than good results. Marty was one of the good ones. He was always willing to lend a helping hand and from an early age he never met a stranger. He could go anywhere meet someone and leave with a friend. He had an upbeat attitude and laughed freely and often. He was the best son, father, husband and son in law anyone could ask for. Marty was also a great storyteller. Often his stories started with “This one time me and my uncle Dave . . .” Yes, he had his fair share of shenanigans but the two of them always had a good plan. Somehow it mostly went awry in the worst way. At least he got a good story out of it! Marty is survived by his loving wife of nearly 21 years, Amanda ; and his amazing sons Kendall D McKee age 16 and Chance A McKee age 14 ;  one sister Janice (Patrick) Houghton; his parents Robert McKee and Terri Paul Dunlap; numerous aunts and uncles, cousins, nieces and nephews including , Debbie Paul Mills  of Fl, David Markve Jr of Casper, Leonard Paul and Kim Silva Garfine both of Gillette. Last but not least his Homax Oil family, clients and friends which are too many to count, who will miss him dearly. He is preceded in death by his maternal grandparents David Markve Sr and Jewell Markve; paternal grandfather, Kendall McKee and grandmother Maythel McKee and his beloved dog Dozer. Memorials and condolences may be sent in care of Gillette Memorial Chapel 210 West 5th Street, Gillette, WY 82716. Condolences may also be expressed at www.gillettememorialchapel.com

To order memorial trees or send flowers to the family in memory of Martin "Marty" McKee, please visit our flower store.