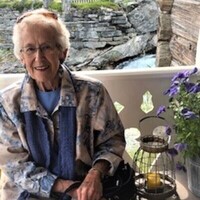 Funeral services for Marlene Christofferson will be held at 10:00 a.m., Tuesday, May 11, 2021 at St. Paul Lutheran Church, Thermopolis, Wyoming. Visitation will be held from 12:00 p.m. to 5:00 p.m., Monday, May 10, 2021 at Mortimore Funeral Home, Thermopolis, Wyoming. Marlene Christofferson age 89, passed away Sunday, May 2, 2021 at The Legacy Living and Rehabilitation Center, Gillette, Wyoming.  Born Marlene Gale Torgerson June 25, 1931, in Morton County, ND, on the family farm, Marlene was the seventh child of Andrew and Anna Ramsland Torgerson.  She was baptized a Lutheran in Sims, ND, and confirmed at the Almont, ND, Lutheran church. Marlene attended grade school at the Curlew Valley grade school and graduated from the Almont, ND, high school.  She attended Dickinson State Teachers’ College, teaching grade school between quarters and graduating in 1950.  The family moved to Billings, MT, in 1951 where she met Donald Ian Christofferson.  Marlene and Don were married in Billings November 28, 1953.  She and Don moved to Casper, WY, in 1954 where their three children were born.  The family moved to Thermopolis, WY, in 1963 where the family made a life.  Marlene was active in the community.  She raised children, was a member of the local school board, worked with husband Don in his insurance business, and served as the Hot Springs County Clerk for twelve years ultimately retiring from that position.  Marlene and Don enjoyed traveling to visit family and friends as well as collecting and refinishing old furniture. Don died May 28, 1998.  Marlene continued living in the family home in Thermopolis until 2014 whereupon she relocated to Ft. Collins, CO, near daughter Becky and son John.  Marlene continued to travel and in 2019 flew to Norway for the first time to visit her father’s farm and her Norwegian relatives.  It was a grand excursion and she was accompanied by children, nieces, nephews and grandchildren. Marlene was preceded in death by her husband, Don, her parents and six siblings – sisters Ruth and Thelma, brothers Arnold, Clarence, Clifford and Walter.  She is survived by children Becky Monchak (Dan), Bob (Michele) and John (Jeannie Haugestuen), seven grandchildren - Adam Monchak (Sarah), Kyla Neuhalfen (Jim), Nate Monchak, Nick Monchak, Travis Christofferson (Kelsey), Kaia Johnson (Ben) and Matt Christofferson (Jackie).  She is also survived by six great grandchildren – Abigail Monchak, Olivia Monchak, Noah Monchak, Madison Monchak, Micah Monchak, and Peyton Christofferson, as well as a multitude of nieces and nephews.  The grandchildren and great grandchildren fondly knew her as Bestemör, an homage to her Norwegian heritage. Marlene was a gracious woman, steadfast in her devotion to God and family.  She will be missed. In lieu of flowers the family request that memorials be made in Marlene’s memory to Campbell County Healthcare Foundation, Hospice Care PO Box 3011, Gillette, WY 82717 or a Christian church of donor’s choice. Memorials and condolences may also be sent in care of Gillette Memorial Chapel 210 West 5th Street, Gillette, WY 82716. Condolences may also be expressed at www.gillettememorialchapel.com

To order memorial trees or send flowers to the family in memory of Marlene T. Christofferson, please visit our flower store.