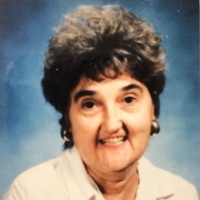 Memorial service for Marjorie Turner will be held at 3:00 p.m., Friday, July 26, 2019 at The Legacy Living and Rehabilitation Center Chapel. Marjorie Belle Turner 91, passed away peacefully with her family at her side on Saturday, July 13, 2019. She was born June 20, 1928 in Framingham, Massachusetts; a daughter of the late Charles E. Wern Sr. and Mary E. Wern. Marjorie graduated from Warren Harding High School in 1946. Marjorie earned an undergraduate degree from Youngstown University, OH and a Master’s degree from California State University. In 1955, Marjorie married fellow teacher John Turner. They had six beautiful children together who brought so much joy to her; she was a very proud mother. Marjorie’s children remain the love of her life. Marjorie was very close to her brother’s three children as well, whom she adored very much. Once Marjorie’s grandchildren came along, they became the apple of her eye. Marjorie played a huge role in her grandkids lives. She would travel every summer to spend her vacations with them. There was a very special bond between them that would only grow stronger throughout the next 38 years. Marjorie would become even more head over heels as she became blessed with great-grandchildren and great- great-grandchildren. Marjorie taught school for 35 years. Teaching in Watts (LA) in the 1970s would be one of Marjorie’s biggest moments as a teacher and she was proud to have this opportunity. In the 1980s Marjorie was felt privileged to be one of the teachers to get a classroom with Cambodian refugees. This sparked something in Marjorie and she knew there was so much more she had to give. Her passion and dedication for education lead her to the next adventure in her life. After Marjorie retired from the Los Angeles School District she made the decision to join the Peace Corps. In 1993, Marjorie was accepted into the Peace Corp and went to Namibia, Africa where she lived in a village and trained English teachers. In 1996, Marjorie went on a mission with the church to Thailand where she also taught English. Marjorie indulged herself with her other love and passion she had, to travel the world. She would joke that she had gypsy blood and this is what drove her to explore the world. Marjorie managed to go to every continent except Antarctica. She was so fascinated with the different types of cultures and appreciated each one. When asked where her favorite place was she had been Marjorie could never answer, she would only reminisce and describe the beauty of each place and how fortunate she felt to have gotten to travel there.  The amazing things that never changed about Marjorie, no matter her age, gypsy tendencies, pink   lipstick, clip on earrings or of course a book in hand was that Marjorie was a selfless human, cared deeply for others and felt every living thing was precious and beautiful. She was committed to helping others and determined to do so. She wanted to make an impact on the world even if that meant changing only one life for the better. Marjorie enjoyed doing volunteer work in her communities and was an advocate for Domestic Violence Awareness. World Peace and education would always remain the core of Marjorie’s beliefs. Marjorie’s memory will live on through her family and friends as we all have special stories to hold onto in our hearts from time spent with her. Because of her brilliant mind, charm and unforgettable one of a kind wit, Marjorie had the ability to captivate those around her. She truly was a magnificent woman, with a pure heart who chose love, peace, joy, kindness and laughter over anything time and time again. Marjorie will be deeply missed by her three sons, Dirk, Kurt and Cord ( Debbie) Turner and a bonus son, Gary Sharkey, 11 grandchildren, Brian Turner, Jacklyn (Nicholas) Sharkey, Daysha Turner, Chad, Tonya and Matthew Turner, Jennifer Sharkey, Angel Taylor, Jeffrey, Judd and JJ Turner, eight great-grandchildren, Rachelle Maxwell, Kaycie Hickert( Aaron), Crystal and Autumn Hudson, Alec, Dominick and Jaselyn Sharkey and Kaylee Hackley, two great-great grandchildren, Mason Hickert and Skylee Watkins-Hickert, niece, Atty. Happy DiCenso and family, nephews, Atty. Charles Wern III and family, Atty. Theodore Wern and family, sister-in-law, Maureen Wern, cousins, Patty Gracie Rhoades, Roger, Richard and Scott Gracie and Vanna Lyke Karpinski, and Michelle Sharkey, Sharon Norfolk and many beloved friends. Marjorie is preceded in death by her parents, brother, Charles Wern Jr., daughters, Mary and Jacqueline Turner, son, Chet Turner and great-great-grandson, Caiden Fedora, several aunts, uncles, cousins and dear friends. The family wishes to think Dr. Phillip McMahill and all of the staff, care providers and volunteers along the way at The Legacy Living Center for the exceptional and personable care Marjorie was given over the last few years. Additionally, we would like to thank Dana Urman, Sheryl Santistevan, Monica Carlson, Home Health, Public health, Meals on Wheels, CC Public Library and the Utah State Library for the Blind and Disabled. Memorials may be made in Marjorie’s name to benefit G.A.R.F. Memorials and condolences may be sent in care of Gillette Memorial Chapel 210 West 5th Street, Gillette, WY 82716. Condolences may also be expressed at www.gillettememorialchapel.com

To order memorial trees or send flowers to the family in memory of Marjorie Belle Turner, please visit our flower store.