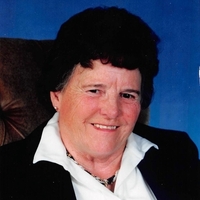 Marjorie Maxine McKenzie, 96, went to be with her Lord and Savior on August 31, 2020. Graveside services will be held on October 3, at 1:00 p.m. at Mount Pisgah Cemetery. Marjorie was born July 31, 1924 in Buffalo, Wyoming to E. E. and Leora M. Hubbard. She attended school in Buffalo and Gillette, Wyoming and took Normal Training in Rapid City, South Dakota. She married Wayne Keith Eldridge on January 30, 1944 at a private home in Gillette, Wyoming. They had five children, Juanetta Maxine, Edward Wayne, Donald Ray, David Allen, and Deanne Marie. She worked with Wayne on the Simpson ranch west of Gillette where she always had a huge garden and lots of chickens. As soon as the children started high school, they built a home in Gillette and eventually moved to that home. She started working outside the home after moving to town. After Wayne died, she married Bruce McKenzie on July 31, 1981. She is survived by three of her children, Juanetta (Bart) Cook, Ed (Linda) Eldridge, Deanne (Doug) Dinsmoore, three sisters, Mona Hunt, Peggy Faler, Pauline Raver, one brother, John (Irene) Hubbard, 15 grandchildren, 35 great-grandchildren, 10 great-great-grandchildren and numerous nieces and nephews. She is preceded in death by her parents, E. E. (Ned) Hubbard, Leora M. Dillin Hubbard, husband, Wayne Eldridge, sons, Donald and David Eldridge, husband, Bruce McKenzie, brothers, Robert H. and Charles B. Hubbard and sister, Bette Cole. Marjorie was a very talented woman. Over the years, she would regularly pick up new hobbies. Some of her many hobbies include ceramics, scroll saw art, golf, cake decorating, crocheting, and quilting. Her family always received the rewards of her talent. She enjoyed her family and kept up on what everyone was doing. For ninety-five and one-half years, she lived in her own home and had just recently moved to Primrose Assisted Living. She will be missed by all of her family and friends. Memorials and condolences may be sent in care of Gillette Memorial Chapel 210 West 5th Street, Gillette, WY 82716. Condolences may also be expressed at www.gillettememorialchapel.com

To order memorial trees or send flowers to the family in memory of Marjorie Maxine McKenzie, please visit our flower store.