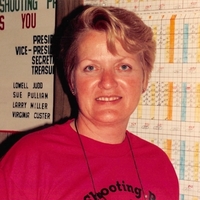 Marjorie Custer, 76, passed away Sunday, December 15, 2019, at Campbell County Health.  Margie was born on March 23, 1943, in Paintsville, KY, to parents Glenn and Christine (Hayes) Lafferty and had been raised in Ashtabula, OH.  After she married the love of her life, Dan Custer, on January 7, 1961, she lived with him in Indiana, PA, and surrounding areas building a lucrative business, going on many exciting adventures, and creating a lifetime of precious memories.

Always willing to experience new things, her husband, Danny, introduced her to trap shooting and hunting and she excelled at both.  In her prime, Margie became one of the top-ranking women trap shooters in the country, holding Lady State Champion titles in multiple states in any given year.  During a time when women were not readily accepted in the field, she fought for equality and fairness, often outshooting the men and winning High Over All ranking.  Using her exceptional shooting skills to hunt game, she harvested deer in Pennsylvania, moose in Canada, and travelled to Colorado for elk.

Moving to Wyoming in 1989, Margie and her husband owned two successful businesses, Circle G Shooting Park and Industrial Alternator and Starter.  After retiring in 2003, she enjoyed jigsaw puzzles, going to Deadwood, SD, to try her luck and continued being a wonderful supporter and advocate for her family.

Margie is dearly loved and missed by her husband of 58 years, Danny; children, Virginia (Ginny) and Ray Custer, grandson Shawn Custer and his wife Gina, all of Gillette; brother, Richard Lafferty of Ashtabula, OH.; three sisters, Mary Kirby of Lebanon, OH, Sue McGeary of Geneva, OH, Helen Turnquist (Buddy), Ashtabula, OH, and Deborah Lafferty of Pittsburgh, PA; and many in-laws, nieces, nephews and friends.    She was preceded in death by her infant son, Glenn; three brothers, William Lafferty in infancy, Glenn Jr. and Edward “Gabby” Lafferty; sisters, Joyce Anne and Sarah Jane Lafferty, both in infancy, and Blanche Corlew of Kingsville, OH; and her parents.

A Memorial Service will be held at 2:00 p.m., January 4, 2020, at the First Assembly of God Church, 601 Carey Ave., Gillette, with Pastor Dan Holden officiating.  In lieu of flowers, the family requests donations to St. Jude Children’s Research Hospital. Memorials and condolences may be sent in care of Gillette Memorial Chapel 210 West 5th Street, Gillette, WY 82716. Condolences may also be expressed at www.gillettememorialchapel.com

To order memorial trees or send flowers to the family in memory of Marjorie Custer, please visit our flower store.