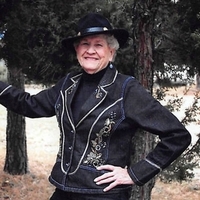 Funeral services for Marie Packard will be streamed live at 10:00 a.m., Saturday, August 15, 2020; www.gillettememorialchapel.com a link to the streaming will be available on Marie’s obituary page. Visitation will be held from 6:00 p.m. to 8:00 p.m., Friday, August 14, 2020 at Gillette Memorial Chapel. Marie Lucille (Coffield) Packard, passed peacefully at home from COPD, surrounded by her loved ones.  She was a loving wife, mother, grandmother, friend, and teacher.  She was born December 12, 1933 in Reeder, North Dakota to Hubert and Lucille (Larson) Coffield.  Marie grew up on the family ranch north of Reva, South Dakota where she attended elementary school.  Marie was the youngest of six children and was sent to attend high school in Hill City, S.D. living with her relatives until graduation in 1950. As a child and young woman Marie was an avid rider and horsewoman.  She would roam the open range and scout the Northern Slim Buttes of South Dakota atop her faithful steed Flicka.  Marie was adventurous, a free spirit, and enjoyed traveling and working outside. In the early hours of January 1, 1956 Marie met the love of her life, Frank D. Packard.  Their courtship was a whirlwind, as the love birds were married a short eight days later on January 9, 1956 in Rapid City, S. D.  Three children were born from this union James Allen, Kathleen Faye (Engle), Denton Ray. The couple followed road construction, moving over 25 times from 1956-1964 and also spent time running dude ranches in Oregon and South Dakota.  In 1964 with three young children in school, Marie, at age 33 decided to follow in her mother’s footsteps and attend Black Hills State College to become a teacher.  In 1969 she graduated with a degree in Language Arts and a minor in library science. The family moved to Gillette, Wyoming where Marie was hired as the Campbell County High School librarian.  Marie served as president of the Wyoming Library Association, and coached girls basketball. In 1979 Marie retired from teaching and became a haul truck driver for the Amax Belle Ayr coal mine.  She later went into mine safety management.  After retiring from the mine Marie taught MSHA classes throughout the state of Wyoming for several years.  During this time, Marie became an exceptional golfer and participated often in the Senior Olympics, which allowed her to travel and compete throughout the U. S. To cope with Frank’s death in 1990, Marie turned to her love of horses and rode by horseback in the 1990 Wyoming centennial wagon train (Bridger Trail) from Worland to Cody.   Marie’s resilience at age 57 was remarkable riding 6 to 7 miles each day, sleeping under the stars, while saddling and caring for her horse. In 1998 Marie moved to the family cabin she and Frank had built for their retirement in Pine Haven, Wyoming. Marie was very proud to be a contributing member of the expansion of this small town where she served as the Mayor in 2001 and 2002. Marie loved giving back to her community serving on the beautification committee and was a member of the Keyhole Country Club. She found great joy in her many friends, she always said if friends were measured in money, she would be a millionaire.  Marie was a giver to those less fortunate and touched many with her generosity. Marie loved to read, paint, macramé, and crafted unique leather work. You would find her night light on into the wee hours as she would read many, many books.  She always said that she would crawl right into the book with the characters. Reading gave her much joy her entire life. Marie’s most notable attributes were her wit, humor, and her ability to generate fun.  She radiated pure joy when she was around her family and friends and instigated many antics throughout her life.  Marie was a born rebel and was the life of every party. Marie is survived by her children Jim Packard (Cindy), Kathleen Engle (Steven), Denton Packard (Donna).  Grandchildren Ja Packard (Angel), Lora Popkes (J.D.)  Kristin Carmichael (Kelly), Kalin Chapman (Beau), and Angela Hartley.  Great grandchildren Garrett, Kinley and Draiten Popkes, Dylan, Liliyana and Lynnora Hartley, Emersyn and Avery Carmichael, and Maddox and Macrae Chapman.  Marie’s chosen daughter, Susan Saunders and family, Rebecca (Aaron), Jaxon, and Riley Mast. Preceded in death by her parents, husband Frank, twin-sisters Elma (Bill) Johnson and Ellen (Elmer) Besler, her brothers Clarence (Delores) Coffield, Arnold (Mary Kay) Coffield, Pat (Faye) Coffield. Memorials have been established at Pine Haven Beatification Alliance and Davis Healing Hearts Home Health.  Condolences and memorials may be sent in care of Gillette Memorial Chapel 210 West 5th Street, Gillette, WY 82716. Condolences may also be expressed at www.gillettememorialchapel.com

To order memorial trees or send flowers to the family in memory of Marie Lucille Packard, please visit our flower store.