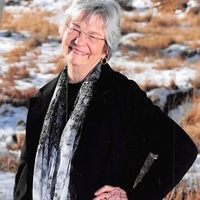 Margaret Ann Hladky, 84, of Gillette, WY, passed away peacefully on October 13, 2021, with her daughters at her side. Margaret Ann was born October 27, 1936, to Gordon B. and Mildred A. (Burr) Mooney in Gillette, WY. She was the oldest sister to three brothers. She attended school in town except, for one year, when she attended near her parents’ ranch 20 miles west of Gillette. She started working at the local movie theatre at age 12, then at Ritters and Corner drug store’s soda fountains and the livestock sale barn. In 1953, she married her high school sweetheart, Delano B. “Spike” Hladky. They shared 68 years of marriage and had three daughters: Linda, Lori, and Karen. She worked at Mountain Bell telephone company and as the secretary for the Selective Service System.  Margaret Ann was a big supporter of Spike’s elections and career as Campbell County Sheriff for over 24 years. Beginning in 1987, Spike and Margaret Ann owned and operated the Hladky Agency for Farmers Insurance Group until they retired in 2008.  During retirement, she enjoyed spending time at her family ranch and winters in the Nevada sunshine. Margaret Ann always loved cooking, snapping family photos, shopping with her daughters and granddaughters, collecting antiques and glassware, camping, her beautiful flowers, and having coffee with her circle of friends. Margaret Ann’s true joy in life was her family. She adored and was adored by her grandchildren and great-grandchildren. She supported them at sporting events, at county fairs, and in pursuing their educational and career goals. Her grandchildren described her as generous, kind, classy, fun, spunky, sassy, and a role model. Margaret Ann is survived by husband Delano B. “Spike” Hladky; three daughters Linda Coxbill (Jim) of Gillette WY, Lori Franzen (Hank) of Riverton, WY, Karen Haller (Joe) of Las Vegas, NV; grandchildren Jennifer Rice (Keefe), Brian Coxbill (Anne), Eric Coxbill (Natalie), Jill Loden (Brandon), John Franzen, Mark Haller, and Sarah Haller; nine great-grandchildren; siblings Allen Mooney (Jan), Dan Mooney (Candy) and sister-in-law Sherryl Mooney. Margaret Ann is preceded in death by her parents and her brother John Mooney. Celebration of life will be held for Margaret Ann on her birthday at 11:00 a.m. Wednesday, October 27 at Family Life Church. Expressions of sympathy in Margaret Ann’s memory may be made to the Rockpile Museum Association where she served on the Board for several years. Memorials and condolences may be sent in care of Gillette Memorial Chapel 210 West 5th Street, Gillette, WY 82716. Condolences may also be expressed at www.gillettememorialchapel.com

To order memorial trees or send flowers to the family in memory of Margaret Ann Hladky, please visit our flower store.