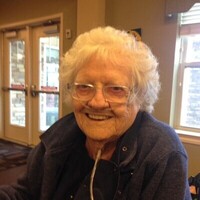 Margaret Gwendolyn (Gwen) Wilkey, age 91 died December 22, 2020 surrounded by her family at the Legacy Living and Rehabilitation Center in Gillette, WY. She died of dementia which she had been suffering from for eight years.  Gwen was born June 16, 1929 in St. Louis, MO to Stanley Stevens and Reba (Eskew) Stevens.  Following high school Gwen attended secretarial school and used those skills throughout her life.  July 17, 1948 Gwen married Linvel Lee Wilkey whom she met at a dance.  They had five children:  Charles, Susan, Gale, John and Darrell.  They lived in several states as Gwen and the children followed Linvel for his job in the oilfield.  They eventually settled in Wright, WY where Gwen worked for Dr. Harmston.  When Linvel retired they moved to Gillette to be closer to their children.  She worked at Vina’s Daycare during this time.  After 49 years of marriage Linvel passed away February 15, 1998.  Gwen was not liking being home alone, so she went back to work.  She worked for The People Project and City Cleaners until she could no longer work.  Gwen loved and enjoyed her family and a few of her favorite things were Pepsi, cigarettes, candy and her dogs.

She was preceded in death by her parents, husband Linvel, three sons: Charles, Gale and Darrell and granddaughter, Alicia Heck.

Gwen’s wishes were to be cremated and buried with her three sons.  There will be no services at this time a Celebration of Life will be at a later date.

Memorials and condolences may be sent in care of Gillette Memorial Chapel 210 W. 5th St.  Gillette, WY  82716. Condolences may also be expressed at

To order memorial trees or send flowers to the family in memory of Margaret "Gwen" Wilkey, please visit our flower store.