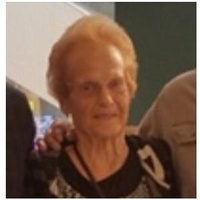 Funeral service for Sally Schofield will be held at 11:00 a.m., Monday, February 18, 2019 at Family Life Church with Pastor Gordon Harper officiating; interment to follow at Mt. Pisgah Cemetery. Visitation will take place from 4:00 p.m. to 6:00 p.m., Sunday, February 17, 2019 at Walker Funeral Home. Lucille “Sally” Schofield age 77, of Gillette, WY passed away Wednesday, February 13, 2019 at St. Vincent’s Hospital in Billings, MT of liver failure. Sally was born on February 6, 1942 in Lawrence Nebraska to William and Ellen Friend. She married Joe Granzer in 1959 and later divorced. Sally was later married to Edward Schofield on May 11, 1989 with whom she spent the remainder of her life. Sally loved playing darts, camping, fishing, gambling, attending her grandchildren’s sporting events and family gatherings. She loved her garden and canning and had a special love for her family and friends. Sally worked as a manager at Wendy’s in Gillette, Wyoming for many years.

To order memorial trees or send flowers to the family in memory of Lucille "Sally" Marie Schofield, please visit our flower store.