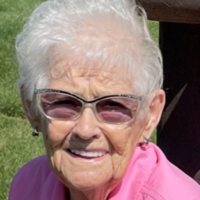 Memorial service for Lucille Garinger will be held at 2:00 p.m., Friday, June 10, 2022 at Gillette Memorial Chapel. Lucille Garinger, passed away on Saturday, March 5, 2022.  Lucille was born August 1928, in the midst of the Great Depression, the third of eight children born to Lawrence and Lena (Drury) Ament.  Lucille spent her younger years growing up around the Sioux Falls, South Dakota, area. Lucille married Leo Kuemper in 1947.  To that union five boys were born.  Albert, Charlie, Robert, Roger and Bruce.  They later divorced. In 1957, Lucille met and married the love of her life, Bard Garinger.  To this union three more children were born: Brenda, Vikki and Brad. Lucille traveled and lived all along the West Coast as Bard worked as an over-the-road truck driver, until finally settling in Wyoming.  Their first stop was Laramie, then Riverside, Casper, and finally settling in Gillette. Lucille was a homemaker while Bard continued to work in the oilfields. When they retired, they became snowbirds, moving to Mission, Texas, so they could golf and enjoy the warm winter weather with friends and family. Lucille was an active member of the Gillette Community.  Volunteering for any Cam-plex event, reading to children in local schools, visiting the Senior Center daily, playing pinochle with her friends, and lots of bowling and golf. Lucille was preceded in death by her loving husband of 57 years, Bard; brothers, Bernard (Buck) Ament, Kenneth Ament, Edward Ament, Herb Ament, Alvin Ament, and her sister, Anne Gabel. Lucille is survived by her daughters, Brenda (Bill) Andrews; Vikki Strande; and her sons Brad (Deena) Garinger; Al (Loriane) Kuemper, Charles (Diana) Kuemper; Robert (Mary Jo) Kuemper; Roger (Sue) Kuemper; and Bruce Kuemper; her sister, Lillian Finn; 13 grandchildren; 19 great grandchildren; and 10 great-great grandchildren. Memorials and condolences may be sent in care of Gillette Memorial Chapel 210 West 5th Street, Gillette, WY 82716. Condolences may also be expressed at www.gillettmemorialchapel.com

To order memorial trees or send flowers to the family in memory of Lucille Garinger, please visit our flower store.