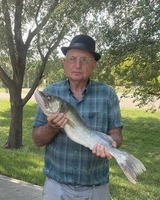 Celebration of Life for Lowrance Horn will be held at 11:00 a.m., Wednesday, January 19, 2022 at Jericho Baptist Church 202 East 8th Street, Gillette, WY  with Pastor Doug Baker officiating; this service will be livestreamed at www.gillettememorialchapel.com. Prayer service will take place at 7:00 p.m., Tuesday, January 18, 2022 at Jericho Baptist Church. Lowrance Maynard Horn was born on February 7, 1945 at Alpena, SD to Erwin and Lula Mae (Schubert) Horn. He passed away at home on January 10, 2022. He attended country school through the 8th grade at Halsey school. He graduated from Huron High School in 1964. After high school, he attended Northwest College of Commerce in Huron, SD for one year. After that, he enlisted in the National Guard and went to Fort Leonard Wood in Missouri for basic training. He was in the National Guard for 12 years. He worked for Flannery’s and Huron Dressed Beef. On November 17, 1972, he married Diane (Garbe) at Our Savior’s Lutheran Church in Wessington Springs, SD.  They lived in Huron, SD for several years, but eventually moved to Gillette, WY in 1979. He moved to Gillette, WY, and purchased a house moving business. He moved houses for 24 years, and later started a pilot car business, D & L Piloting in 2003. He continued to work, until he passed away. He also liked to tinker in his garage and there wasn’t anything that he couldn’t fix. In 2019, he pursued gold mining, which was a dream of his. He didn’t have the opportunity to gold mine as much as he had hoped, due to his cancer diagnosis and declining health.

He lived in Wyoming for 42 years, and throughout this time, he made many good friends. In 2004, he helped build the Gillette Thunder Speedway. When he was younger, he had his own race car and raced at the tracks around the Huron area. He also enjoyed fishing at West Bend and at Bob’s Resort. In the past several years, he enjoyed going to the Lariat Restaurant in Gillette to visit with the “locals” and have his beloved coffee. Lowrance always made friends easily and always had a “good story” to tell. He had a kind heart and was always willing to help those that were down on their luck.

Lowrance was a very active member of his home church, Jericho Baptist Church in Gillette. His church family was very important to him. When he was diagnosed with terminal cancer, he found comfort in his faith. One of his final wishes, was for everyone to be saved.

He was preceded in death by his parents, brothers Bruce and Roland, his sister-in-law, Jeannie, and aunts and uncles. A memorial service will be held in Virgil, SD at a later date. Memorials and condolences may be sent in care of Gillette Memorial Chapel 210 West 5th Street, Gillette, WY 82716. Condolences may also be expressed at www.gillettememorialchapel.com

To order memorial trees or send flowers to the family in memory of Lowrance Maynard Horn, please visit our flower store.