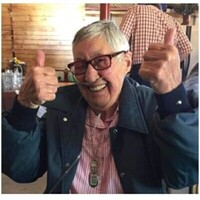 Funeral service for Elaine Scroggins will be held at 2:00 p.m., Friday, March 25, 2022, at Gillette Memorial Chapel with Chaplain Gordon Harper officiating; interment to follow at Mt. Pisgah Cemetery. Visitation will begin at 10 a.m., the day of the service, also at Gillette Memorial Chapel. Lovista Elaine Scroggins, she preferred Elaine or Nana to all who knew her; passed away on March 22, 2022, at Campbell County Health. Elaine (Patterson) Scoggins was born on January 6, 1936, at the family home in Horace, Kansas to Clyde and Josephine (Dinsmore) Patterson. Elaine was the second child born. Her brother Claude was the oldest then Nana followed by Sarah, Sandy, Sheridan and Barbie. Growing up she loved to be outside every chance she got. When she was 14 years old, she met her future husband Ed at a dance. When she was 15 she married Edwin Elmer Scroggins on December 15, 1951. They had their first son, John Scroggins on June 17, 1952; then daughter Shirly on July 15, 1953; daughter Debbie on August 13, 1955; daughter Diane on September 14, 1957, and son Jay on July 1, 1959. Elaine enjoyed gardening and being a stay-at-home mother.  Ed always worked in the oilfield since he got out of the Navy. He worked for Megabar until 1967 when the family move to Gillette, Wyoming. Ed started working for Joe Banks Enterprises. In 1976 after the passing of her youngest son, Jay; she went to work in the bakery at Decker’s. After a few years she quit and started traveling around with Ed for work. She truly enjoyed the time her and Papa spent together traveling.  On holidays they spent in Kansas with her family and in the summer, they spent two weeks in Oklahoma with Ed’s family. Nana enjoyed every moment with her kids and grandkids. She is survived by her daughter, Shirley; grandchildren, Darren, Amber, Yvonne, Colleen, Angie, John Jr., Jacob, and Nathan. She is preceded in death by her husband, Ed; children, John, Debbie, Diane and Jay; siblings, Claude, Sandy and Barbie; grandchildren, Travis and Miranda. Memorials and condolences may be sent in care of Gillette Memorial Chapel 210 West 5th Street, Gillette, WY 82716. Condolences may also be expressed at www.gillettememorialchapel.com

To order memorial trees or send flowers to the family in memory of Elaine "Nana" Scroggins, please visit our flower store.