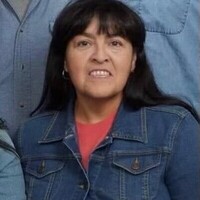 Loretta O. Gonzales, 60, of Wright, WY, passed away Sunday, June 5, 2022, after a very brief battle with cancer, surrounded by family and never-ending love. Memorial Services begin at 1 p.m. Friday, June 10, 2022 at St. Matthews Catholic Church in Gillette, WY, followed by a light lunch. The Mass and Internment will take place Monday, June 13, 2022, in Midvale, UT at St. Therese Catholic Church. Rosary will begin at 10 a.m. followed by Mass at 11 a.m. Interment will follow at Midvale Cemetery with a luncheon to follow at St. Therese Social Hall. Loretta was born July 15, 1961 in Murray, UT to Albino and Guadalupe (Trujillo) Ortega, the youngest of 11 children. She lived most of her life in Utah, graduating from Hillcrest in 1979. On September 18, 1985, Loretta married the love of her life, Frank Gonzales. From this union of love, Loretta and Frank created their greatest accomplishments, their 3 children, Thomas, Joseph, and Michaela. In 2002 Frank and Loretta moved their family to Wyoming. Loretta was employed with Watco for the past 10 years. Loretta was first and foremost an amazing wife, mother and grandmother. She devoted her life to her husband, children and her precious grandsons. There wasn’t anything she wouldn’t do for them and loved each of them with all she had. Loretta enjoyed being outdoors, camping, and especially planning family vacations, with her favorite trip of all being several visits to Disneyland, most recently Disney World. Loretta was also a devoted sister and caring friend. She had an unwavering strength, a special kindness, and a heart full of generosity. To the very end she was making sure everyone she loved was taken care of. Loretta is survived by her husband Frank, children, Thomas (Alaina) Gonzales of Gillette, WY, Joseph (Renee) Gonzales of Wright, WY, Michaela Gonzales of Wright, WY and grandsons, Chase Talbot-Gonzales and David Sundfor-Gonzales. Brothers, Lawrence (Ida) Ortega, Rick (Kelly) Ortega; Sisters, Rose (Mike) Sorenson, Elva Ortega, Patricia Anderson and sister-in-law Helga Ortega. Many Uncles, Aunts, Nephews, Nieces, and Cousins. Her pets, Bandit, Lucky, Sunshine and Sweet Pea. Loretta was preceded in death by her parents, sister Priscilla Valdez and brothers, Bino Ortega, Roy Ortega, Carlos Ortega, and Phillip Ortega, her niece Lisa Ortega and her precious pets, Buddy and Princess. Memorials and condolences may be sent in care of Walker Funeral Home 410 Medical Arts Court, Gillette, WY 82716. Condolences may also be expressed at www.gillettememorialchapel.com

To order memorial trees or send flowers to the family in memory of Loretta Miriam Gonzales, please visit our flower store.