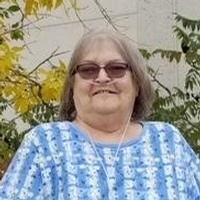 Funeral service for Linda Stitt will be held at 10:00 a.m., Thursday, July 19, 2018 at Walker Funeral Home with Kenna Rose officiating. Visitation will take place from 4:00 p.m. to 7:00 p.m., Wednesday, July 18, 2018 at Walker Funeral Home. Linda Stitt, 70, of Gillette, Wyoming passed away peacefully July 14, 2018.  Linda Beth Stitt was born October 3, 1947 to Everett and Elizabeth Stitt in Scottsbluff, Nebraska.  She was the oldest of four children that grew up on a farm east of Minatare, Nebraska.  She attended a small country school K-8th grade in McGrew, Nebraska and graduated High School from Minatare in 1965. She began working off the farm at Gary’s cafe, the local sugar factory and Kmart when they opened their first store in Scottsbluff.  She became a supervisor at Kmart and earned her Associates of Business degree while raising her young family. Linda had two daughters she treasured.  She started in Alliance, Nebraska with Burlington Northern Railroad in 1979, transferred to Gillette, Wyoming in 1982 and retired from BNSF after 30 years.  Linda’s true joy in life centered on spending time with her two daughters and four grandsons.  Her passions in life were celebrating holidays, especially Halloween, giving small gifts to let others know she cared and helping others in unexpected ways. She pursued that until the end, earning the nickname of Holiday Lady in the Dialysis Unit.  In honor of Linda’s love of Halloween her family is asking everyone to wear their favorite orange or Halloween piece.

Linda is survived by her siblings, Ron Stitt; Robert (Becky) Stitt; and Carol (Joel) Stitt-Gajardo; her daughters, Wendi (Cary) Ernst and Sandi (Jerry) Short; her grandsons, Skylar Stitt, Shane Ernst, Elijah Short and Trevor Ernst.  She is preceded in death by her parents. Memorials and condolences may be sent in care of Walker Funeral Home 410 Medical Arts Court, Gillette, WY 82716. Condolences may also be expressed at www.walkerfuneralgillette.com

To order memorial trees or send flowers to the family in memory of Linda Beth Stitt, please visit our flower store.