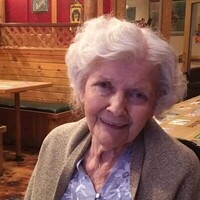 On Monday May 3, 2021 Lillis “Mickey” Martens passed away at the age of 86 in Gillette, WY. She was born Lillis D. Ohnemus in Cherry Creek, SD on July 28, 1934 to Walter and Mamie (Quam) Ohnemus where they owned a ranch. Her father soon after nicknamed her Mickey and the name stuck, fondly and permanently. She grew up in Terraville, SD and was one of the children that used the Homestake/Terraville tunnel to get to and from school in Lead during the heyday of mining operations in the area. In May of 1952 she graduated from Lead High School, she was baptized at Bethel Lutheran Church and married Bob Patterson. She said, “That was quite a time for me.” They had two children. Tracey and Scott. Bob passed away, then in 1968 she married John (Jack) W. Martens, a Wyoming rancher and businessman. They lived in Upton, WY operating Jacks Cowboy Bar for many years. It was there that Mickey formed many lifelong friendships- with employees and customers alike. Mickey loved reading, gardening, (later becoming a Master Gardener), her many pets, and arrowhead hunting- all animals and nature to be exact. She was close to her sisters, brothers, cousins and her children and grandchildren. Her nieces in Denver have a special admiration for her and vow that their own love of nature and poetry and being strong, able women comes from the example she set. Mickey is preceded in death by both parents and husbands as well as her daughter Tracy (Buck) Rhoads, brothers Iren (Marades) Borup and Leonard Borup and sisters Yvonne (Glenn) Primeau, Ellene Crownover, and Mary “Junie” (Sterling) Price. She is survived by her brother-in-law David Crownover of Chattanooga, TN; her son Scott Martens of Gillette; grandchildren Elizabeth Ann (Sean) Reynolds and Tiffany (Shayne) Sedillo of Gillette and four great-grandchildren plus many beloved nieces and nephews across the country. In lieu of flowers, memorials can be made in her name to your local animal shelter. Memorials and condolences may also be sent in care of Walker Funeral Home 410 Medical Arts Court, Gillette, WY 82716. Condolences can be expressed at www.walkerfuneralgillette.com

To order memorial trees or send flowers to the family in memory of Lillis Darline Martens, please visit our flower store.