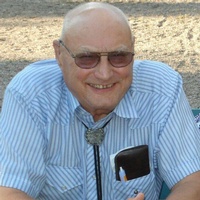 Funeral service for LeRoy Townsend will be held at 2:00 p.m., Monday, October 29, 2018 at Gillette Memorial Chapel with interment to follow at Rozet Cemetery. Visitation will take place from 5:00 p.m. to 8:00 p.m., Sunday, October 28, 2018 at Gillette Memorial Chapel. LeRoy Eugene (Doc) Townsend, 88, of Gillette, WY passed away on October 25, 2018 surrounded by family while he was in Comfort Care at the Sheridan Memorial Hospital.

LeRoy was born on August 8, 1930 in Davenport, Iowa to Eugene and Marie Townsend. He was the oldest of six children. He made his choice to serve the Lord in his youth and remained true to that his entire life.

He married Rosanna Loomis on October 7, 1952 in Bridgeport, NE. They lived in Scottsbluff, NE for 22 years where he founded T & T Guns and Ammo and later moved his family and business to Gillette, WY in 1974.

To order memorial trees or send flowers to the family in memory of LeRoy Eugene Townsend, please visit our flower store.